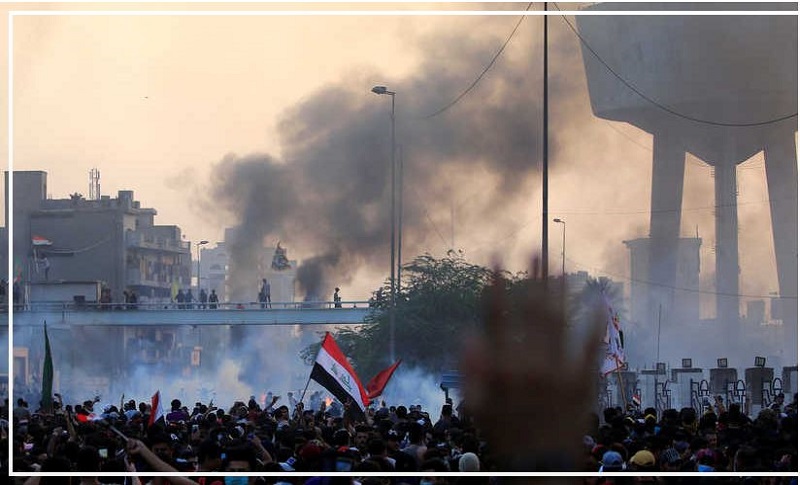 Where there is trouble in the Middle East, the belligerent Iranian regime is not far away. In Iraq, the people are protesting social and economic conditions and they want to see the Iranian regime removed from the country and they are calling for the end to the regime’s interference in internal affairs.

The US Ambassador to Saudi Arabia John Abizaid recently spoke about Iran’s influence in the region, saying that the Iranian regime is “always ready to have somebody else fight their fight”. Although Iran’s actions could be interpreted as it gaining strength, Mr. Abizaid said that it is, in fact, having the opposite effect.

The Iranian regime, that has been ordering clampdowns on society at home, seems to be heavily involved in the crackdown in Iraq too. There have been reports of deaths, some because of sniper shots on protesters. Sources have said that Iranian regime mercenaries are guiding counterparts in Iraq through the crackdown on demonstrators.

Iran’s involvement in Iraq is extensive, and the People’s Mojahedin Organization of Iran (PMOI, Mujahedin-e Khalq or MEK) has obtained information confirming that the notorious Islamic Revolutionary Guards Corps (IRGC) and its Quds Force are in control of the regime’s consulates and embassies in Karbala, Najaf, Basra, and Baghdad. IRGC commanders are in control of numerous groups connected to the regime – Hashd Al-Shaabi, for example.

At the consulate in Karbala, there are a number of Quds Force officers. An agent of the MOIS intelligence agency is also based there.

The Basra consulate is where IRGC Brigadier General Ahmad Sepahpush is stationed. He was previously stationed at Iran’s Khuzestan IRGC base.

At the Baghdad embassy, Brigadier General Iraj Masjedi who has run operations for a number of terrorist plots is in charge of the IRGC commanders in the country. The diplomatic deputy and Masjedi’s second-in-command is Seyyed Mousa Alizadeh Tabatabai – another IRGC Brigadier General.

It is very clear that Iran’s Quds Force has influence at very high levels in Iraq. The representative of Supreme Leader Ayatollah Ali Khamenei in Mashhad said on Friday 20th September that Iran is not “limited by its borders”, going as far as to explicitly state that “Iraq’s Hashd Al-Shaabi is Iran”. Pointing to further influence in the region, the Supreme Leader’s representative said: “Lebanese Hezbollah is Iran. Yemen’s Ansarollah (Houthi militia) is Iran. The Vatani front in Syria is Iran. Palestine’s Islamic Jihad is Iran. Palestine’s Hamas is Iran.”

For as long as the regime keeps meddling in the affairs of other nations, there will never be peace in the Middle East. The National Council of Resistance of Iran (NCRI) said: “Stability and tranquillity in the region first require the expulsion of the regime’s mullahs, Revolutionary Guards and paramilitary proxy forces in particular from Iraq, but also from Syria, Yemen, Lebanon, and Afghanistan. Iraq specifically serves as a springboard for the regime. Thus, expelling the regime from Iraq and cutting its arms in this country would have an indispensable effect in pushing the regime back.”