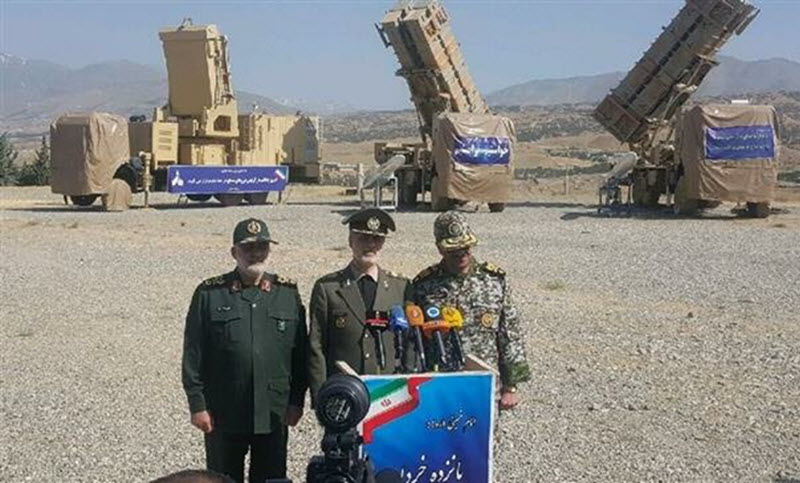 Whenever Iran announces a new anti-aircraft missile system, questions arise, such as, is it new, or a knockoff?

At the unveiling ceremony of a new surface-to-air missile, the Khordad 15, Iran’s Defense Minister, Brigadier General Amir Hatami, said that the system is “capable of detecting fighter jets and combat drones from 150 kilometers [93 miles] away and of tracking them within a range of 120 kilometers [75 miles].” The Defense Minister quoted Iranian state media and added, “The system can also detect stealth targets at a distance of 85 kilometers [53 miles] and engage and destroy them within a range of 45 kilometers [28 miles].”

According Hatami’s claims, in less than five minutes the Khordad 15’s Sayyad 3 missiles simultaneously detect, intercept, and destroy six targets, and can be ready to engage those targets.

Tehran Times reported that Hatami also said that the “air defense system is equipped with a phased array radar and independent launch pads and can effectively take action against various aerial targets, such as reconnaissance aircraft, bombers and tactical warplanes.”

Iran’s Press TV boasted that the Khordad is an Iranian design. “Iran has recently made major breakthroughs in its defense sector and attained self-sufficiency in producing military equipment and hardware despite facing sanctions and Western economic pressure.” Video showed a flatbed military truck with a rotating, rectangular launcher on the bed. The launcher appeared to contain four missile canisters in two rows of two canisters each. Another truck appeared to mount a rotating slab-shaped radar antenna.

Many believe this is not quite a true representation of the situation. The Sayyad 3 may very well be based on a foreign design — it does somewhat resemble a Sayyad 2.

The weapon was unveiled amid rising tensions between Iran and the U.S. The Trump administration abandoned a multinational agreement with Iran that restricted its nuclear weapons development. The U.S. has reimposed crippling sanctions that have badly damaged Iran’s economy.

Following reports that Iran was preparing to retaliate by striking U.S. targets in the Persian Gulf, the aircraft carrier USS Abraham Lincoln was dispatched to the region and the Sayyad 3 will probably not prove much of a deterrent to U.S. military operations, should a conflict erupt.