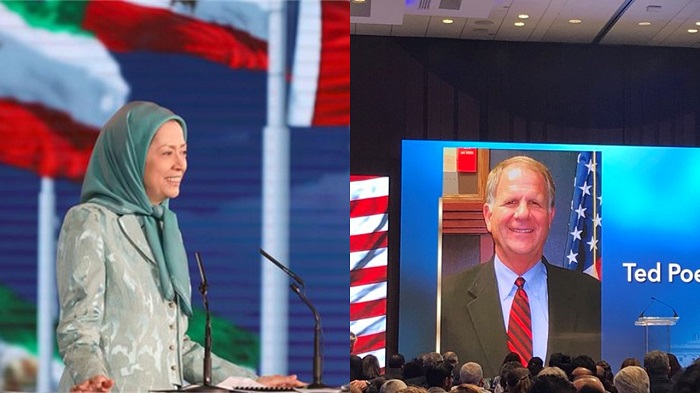 Transcript of remarks by Ted Poe, a former member of the House of Representatives at worldwide internet conference focusing on the mullahs’ support for terrorism and shutting down its embassies- July 20, 2020

Thank you, thank you Madame Rajavi (Mrs. Maryam Rajavi is the President-elect of the National Council of Resistance of Iran’s NCRI). Thank you for your leadership. History will record you as one of the people in all of human history who stood up for freedom.

Two senior members of the @HouseForeign of U.S. Congress, Judge Ted Poe and chairman Dana Rohrabacher meet Mrs. Maryam Rajavi, the president-elect of the National Council of Resistance of Iran at her residence near Paris to discuss #IranUprising, and U.S. policy on Iran. pic.twitter.com/o9RgLDqnMa

You will be counted among the few as leaders who stood up for freedom and never gave in and never gave up. And it’s an honor to address you and other freedom fighters throughout the world. As many of you know, I represented Texas, and we have a lot of good Iranian folks in Texas. We’re teaching them how to talk Texan now, and that way we can communicate better with each other.

Many of you have lost friends and relatives and neighbors because of the coronavirus. Iran has a great number of casualties because of the coronavirus and our sympathies go to you. And to you folks in Camp Ashraf number 3, it’s good to talk to you again. I enjoyed visiting with you some years ago and our next camp will be Camp Ashraf 4, but that will be in Tehran, and the sooner the better.

This battle has been going on for 40 years for liberty. And during all of that time, there’s never been any accountability from the regime for its murder and mayhem and pillage and evil. Whether it’s 1988, or 2000, or 2017, 2009 rather, they’ve never been accountable for these actions of evil throughout the world. Let us not forget that during the Iran-Iraq War, how the regime, the mullahs, sent children out into the minefields to find the mines that were there.

"This battle for liberty has been going on for 40 years." Ted Poe and Former Member – U.S. House of Representatives @iran_policy #FreeIran2020 #sponsored https://t.co/umygqIYgBm

Any government under any circumstances that uses children to find mines by stepping on them has got to go. But there’s never been accountability. There’s been a murder in the camps in Iraq, and all of those people who were killed, many of whom’s photographs I showed when I was in Congress, nobody’s been held accountable. They are, the regime is the number one terrorist group in the world. And those terrorists, their day is long overdue for being held accountable. And if you need some judge to hear those cases, I will take them all and hear all of those and give them a trial.

Judge Ted Poe
"Iran’s regime said you won’t last in Camps Ashraf & Liberty but you made them a paradise. The regime said you can’t leave Iraq, but you came to Albania and created this paradise in Ashraf 3."#FreeIran#WeSupportMEK#IStandWithMaryamRajavi pic.twitter.com/0gdoftOBXk

Congress’s recent resolution, House Bill 374, condemns the current regime and supports the people. And that’s what it’s all about. We support the people. We must not ever forget that all of us are given our rights by the Almighty, not by God. We are born with certain unalienable rights: life, liberty, and the pursuit of happiness. And yes, I’m quoting part of the Declaration of Independence. But let us not forget the rest of the Declaration of Independence. Governments are instituted among men to secure those rights. And if the government becomes destructive to those ends, it is the right, the right of the people to alter or abolish that government. So, we have the human right to change that government when it has become destructive. And what evidence do we need? We’ve got 40 years of evidence against the mullahs in Tehran. The human rights of people have been analyzed, and justice never prevails in Tehran.

So, we must keep up the fight. And don’t let those mullahs keep you awake at night. You keep them awake, that’s what you do. They need to watch out for you because you want freedom. You are for liberty, they are for slavery. You are for life, they are for death. You love our country and the people, and they hate you and they hate your country. The mullahs must go. The regime is about to topple, and it’s time we help it do that The people of Iran need to help it do that.

And so, as we worry, concern ourselves with this virus, COVID-19, there is a worse virus taking place, and that is the virus of the mullahs’ plague against Iran and all free peoples. And so we must fight that virus and fight that plague. Be strong, be courageous, you daughters of democracy and you sons of liberty. Thank you and that’s just the way it is.