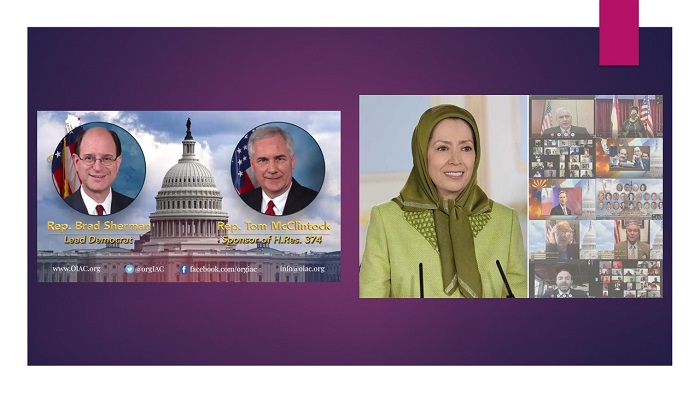 Iran “Virtual” Rally: June 17, 2020 – I am pleased to be joined with you all today.  There is a reason why a strong bipartisan majority of the United States House of Representatives has come to cosponsor this resolution condemning Iran’s terrorist acts.

It is because the world is watching the struggle for freedom in Iran and is cheering for your cause.

We have seen the Iranian people taking to the streets and the airwaves year after year demanding liberty and justice that is the right of every human being.

We hear you: the ruling regime has denied the people of Iran these rights and by so doing lost any claim to legitimacy.

Iran is one of the oldest and greatest civilizations in history, but it has been suppressed and plundered by a clique of theocratic thugs that comprise the illegitimate Iranian government.  In past eras, the Iranian people have known the happiness and prosperity that freedom makes possible and are now seeking to reclaim it.

As the mullahs have become more oppressive and extreme, the international resistance to them has become stronger and more resolute   The more the story of Iran is told, of its proud ancient heritage of freedom and civilization, and of its current curse of despotism and terror, the more the world has rallied to your cause.

It is becoming increasingly evident that Iran’s rulers are beginning to fear such resistance. During the massive opposition protests in late 2018, authorities shut down the internet for more than a week to suppress information about the protests and related state violence. When silencing protesters wasn’t enough for them, they killed them in the streets.

Recently, as the global pandemic took a devastating toll on Iranian people, the regime rejected humanitarian assistance from the U.S. and sought to convince the world that sanctions were the cause of the coronavirus wave sweeping the country. This even though the regime has spent over $16 billion since 2012 to fund its terror proxies abroad while Iranian healthcare services remained critically underfunded.

Of course, the Iranian people are no strangers to the lies of its despotic rulers, as graffiti in a Tehran suburb read “The Islamic Republic in Iran is the real coronavirus”.  The most prominent hashtags coming from Iran were #KhameneiVirus and #IslamicRepublicVirus.

Despite the domestic and international acknowledgment of Iran’s oppression, the regime has remained intent on provocation and destabilization. They attack foreign oil tankers in the Strait of Hormuz and continue using embassies as fronts to plot terrorism.  But after the killing of General Soleimani, who was responsible for an incalculable number of killings, the regime has been placed on notice that their acts of international terrorism will be countered by force.

Nonetheless, it remains clear that the regime is willing to crush its economy and kill its people for the sake of nuclear aspirations and spreading terror, further jeopardizing the safety of the Iranian people and threatening the peace of the world.

The majority of the members of the United State House of Representatives backed on Wednesday, June 17, a resolution in support of the Iranian Resistance and condemning the terrorist activities of the Iranian regime.#FreeIranhttps://t.co/cwFnXuA7tI

Joined now by 221 members of the House of Representatives, I have introduced House Joint Resolution 374, which offers solutions for the future of Iran.

It is the first time that the House is offering a comprehensive solution to counter the Iranian threat. That solution relies on the Iranian people – not military actions.

The initiative is strongly supported by both parties and involves representatives from 41 states and all committees including the House committees of Foreign Relations, Armed Services, Homeland Security, Appropriations, and Select Committee on Intelligence.

This resolution was brought to the attention of Secretary Pompeo this week with the names of 221 co-sponsors as a policy suggestion that the administration should consider.

It comes at a time when the Iranian opposition to the regime, the National Council of Resistance of Iran (NCRI), is steadily gaining momentum and has thus become the main target of the regime’s global terrorism.  Dozens of the Iranian regime’s “diplomats” as well as its agents have been expelled or jailed by the European nations, including Belgium, France, Albania, as well as the United States for their terror plots, particularly against the NCRI officials.

The Iranian resistance (PMOI / MEK Iran) remains as the main target of repression in Iran. Many of its supporters have recently been arrested in Iran for their affiliation with this movement.   Last November, the regime murdered at least 1,500 innocent Iranians protesting its coverups, mismanagement, and corruption.

The International Atomic Energy Agency has found the Iranian regime in non-compliance with its international agreements on nuclear weapons. The cruise missiles used in several attacks on oil facilities and an international airport in Saudi Arabia last year were of Iranian origin

With the U.N. Arms embargo due to expire in October, this resolution offers an effective path for the United States to take in dealing with the Iranian regime.

While progress has been made, one resolution by one chamber of government is not enough to achieve true change. That will require treating the Iranian dictatorship as the international pariah that it is.  And it will require providing every ounce of moral and material support that the Iranian opposition needs to rid their nation of this fascist-Islamic dictatorship, to restore their proud heritage of Persia and to restore their rightful place among the civilized nations of the world.

That so many Members of Congress have come together to condemn these terrorist acts and express in no uncertain terms our support for the Iranian people’s fight for freedom is a testament to the effectiveness and resiliency of the opposition movement.

And now, it is my honor and privilege to introduce Mrs. Maryam Rajavi, the President-elect of the National Council of Resistance of Iran, and to wish all of you Godspeed in your historic and vital work.

MARYAM RAJAVI: THE PEOPLE OF IRAN ARE MORE DETERMINED THAN EVER TO CONTINUE THE STRUGGLE FOR FREEDOM