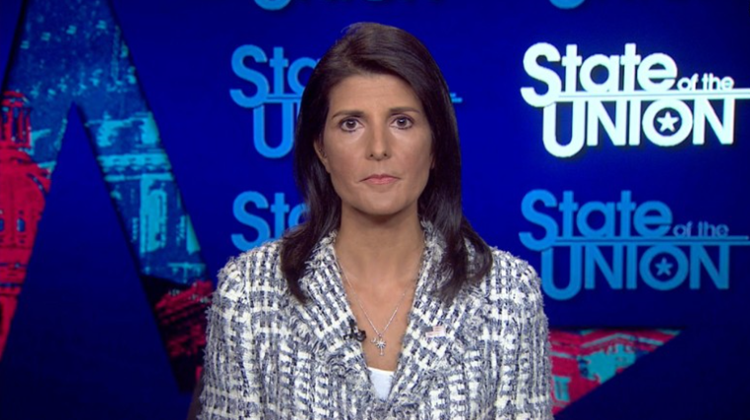 The USA is considering new sanctions against Russia and Iran for their support of Syrian dictator Bashar al-Assad after his most recent chemical attack which killed over 100 civilians, according to the USA’s UN ambassador Nikki Haley.

Hayley appeared on CNN’s State of the Union to confirm that, regarding tougher sanctions on Assad’s supporters, nothing was off the table, particularly after Russia condemned the US’s retaliatory strike on a Syrian air force base.

She told Jake Tapper: “I think [those are] conversations that [Trump] will be having and have started to have, going forward. But I think he will have to look at the situation.”

She noted that the Russian ambivalence to the war crime, which has injured more than 400 people, may have prompted the investigation on Russia, which aims to determine whether Russia was involved in the chemical attack.

She said: “You saw this terrible tragedy on innocent people, a lot of them children, and the first reaction from Russia wasn’t ‘how horrible,’ it wasn’t ‘how could they do this,’ it wasn’t ‘how did this happen,’ it was: ‘Assad didn’t do it.’ Why was that the reaction?”

The Russian Government claim that there is no evidence that there were any chemical weapons at the Shayrat Airfield which the USA attacked on Friday, but Hayley rebukes this.

She said: “We’ve seen the evidence on Assad, we know exactly what happened.”

Although the evidence is currently classified, Hayley hinted that it would be declassified as soon as it was safe to.

Following the airstrike, Donald Trump said: “Tonight, I call on all civilised nations to join us in seeking to end the slaughter and bloodshed in Syria and also to end terrorism of all kinds and all types.”

Rex Tillerson, the US Secretary of State, accused Russia of “failing [to] live up to its commitments under the chemical weapons agreements”.

He told ABC’s George Stephanopoulos that: “The failure related to the recent strike and the recent terrible chemical weapons attack in large measure is a failure on Russia’s part to achieve its commitment to the international community.”

He also said that as of yet, there is no evidence to directly link Russia to the chemical attack but that during his visit to Moscow today, he would call on the Russian government to fulfil its obligation to the international community regarding the elimination of chemical weapons.

He also made clear that the US would not be lifting sanctions on Russia relating to the annexation of Ukraine and Crimea until issues in the region had been addressed.