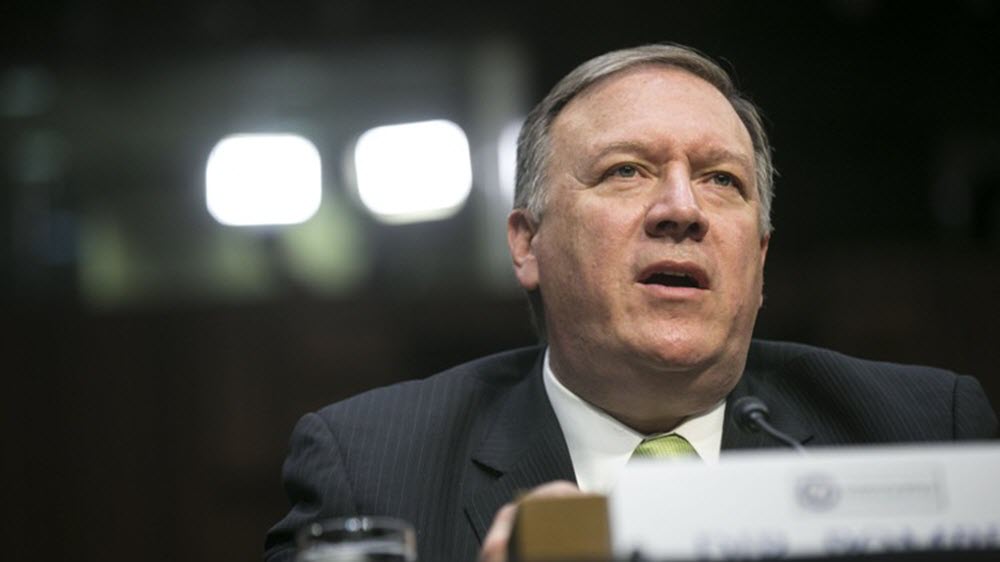 In a speech at the University of Texas on Thursday, CIA Director Michael Pompeo attacked the Islamic Republic, calling it “a thuggish police state” and a “despotic theocracy,” and comparing its ambitions to those of ISIS.

Delivered as the keynote at a national security forum in Austin sponsored by the university, Pompeo’s speech, according to one senior U.S. intelligence official, was “setting the stage” for the Trump administration’s announcement on the nuclear agreement, expected Friday afternoon.

The president is expected to withhold recertification of the agreement, sending the issue to Congress, which will have 60 days to reimpose the sanctions lifted after the nuclear deal was made. It has also been reported that the White House may designate Iran’s Revolutionary Guard as a terrorist group.

Iran has promised serious “consequences” if the IRGC is named a terrorist group. The U.S. has previously listed IRGC officers and affiliates as terrorists, but has yet to name the group as a whole.

Although Pompeo gave no indication of whether the Islamic Revolutionary Guard Corps will be listed as a terrorist organization, according to the same U.S. official, his remarks were “an aggressive indictment.”

In his speech, Pompeo said,”Iran’s Ministry of Intelligence and Security and the Islamic Revolutionary Guard Corps are the cudgels of a despotic theocracy, with the IRGC accountable only to a Supreme Leader.” He continued, “They’re the vanguard of a pernicious empire that is expanding its power and influence across the Middle East.”

“In recent years, the IRGC has become more reckless and provocative, seeking to exploit the vacuum left by instability in the Middle East to aggressively expand its influence,” he added. “It openly vows to annihilate Israel. And when you look at the death and destruction inflicted in Syria, Yemen, and Iraq by Tehran and its proxies, the threat is clear: Iran is mounting a ruthless drive to be the hegemonic power in the region.”

Pompeo compared Iran to the terror group ISIS, “For unlike ISIS and its mirage of a caliphate, Iran is a powerful nation-state that remains the world’s largest state-sponsor of terrorism. The Islamic Republic is Iran’s version of what the caliphate ought to look like under the control of an Ayatollah and his praetorian guard, the IRGC.”

According to the CIA director, the IRGC allegedly attempted to carry out a terrorist attack in Washington, and suggested a U.S. serviceman had been killed by an IED linked to Iran.

Manssor Arbabsiar was sentenced four years ago, to 25 years in prison for plotting to assassinate the Saudi Ambassador in Washington. Pompeo claimed that Arbabsiar had plotted the attack with the Guards’ Quds Force.

Although Arbabsiar was convicted, several Iranian experts inside and outside the U.S. government were suspicious that he may have been acting on behalf of the IRGC, suggesting that the plot was a “rogue operation.”

Regarding Iran’s complicity in the use of IEDs, Pompeo mentioned the possibility that a soldier had been killed this month by Iranian weapon, pointing out that he had been killed “in an area controlled by a Shia militia aligned with Iran.” Pompeo said, ”We do not have evidence of a direct link to Iran, but we are closely examining this tragic incident.”