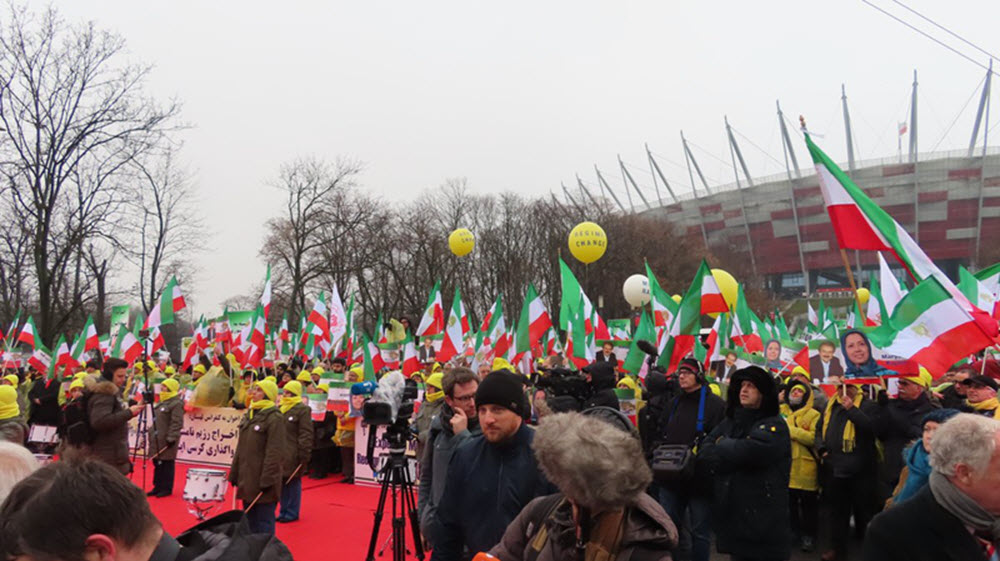 The main opposition to the Iranian regime, the MEK / PMOI, is holding a Free Iran rally outside the Warsaw Summit in Poland. The supporters have gathered to ensure that the voice of the people of Iran is not forgotten and to strengthen their calls for freedom, democracy and human rights through regime change.

Numerous officials and political figures are attending the summit in Poland where Iran will be discussed as one of the most – if not the most – dangerous threat to peace and security in the Middle East.

The people gathered in the streets were greeted by several long-time supporters of the Iranian Resistance and there were many words of encouragement and support for the suffering people of Iran and the determined freedom fighters.

Marcin Święcicki, a Member of the Polish Parliament and former Mayor of Warsaw and a former minister for foreign economic relations, spoke to the crowd, saying that he absolutely wants to see democracy and peace for the people of Iran.

His compatriot, Senator Ryszard Majer, also reminded those at the rally that the people of Poland can relate to the people of Iran in the struggle for freedom because they have lived through a similar situation. His words were full of hope that Iran would one day soon be freed from oppression like his county was.

Former US Democratic Senator Robert Torricelli also highlighted the significance of the summit being held in Poland – a country where people struggled with their oppressors for decades too. He said that the opposition, led my Mrs. Maryam Rajavi, is the only way to move forward.

Other delegates addressed the participants of the Free Iran rally, making their support for the opposition very clear. It is very significant for these prominent members of the international community to publicly voice their support for the people of Iran because many have turned a blind eye to the reality of life in Iran, including numerous European officials who prefer to nurture potential trade deals with Iran rather than speak out about the regime’s terrorist activities.

Matin Doustmohammadi, a representative of the Iranian youth associations in Europe, and Javad Dabiran, a member of the Foreign Affairs Committee of the National Council of Resistance of Iran (NCRI), also addressed the rally. They highlighted the significant role of the Resistance – both those inside and those outside of Iran.

The Iranians gathering in Warsaw want the delegates attending the Warsaw Summit to condemn the ongoing human rights abuses of the regime in the strongest possible terms and to ensure that their countries adopt a firm stance against the religious dictatorship. They call on the international community to support the opposition’s 10-point plan that would separate religion from the state and recognise equality.