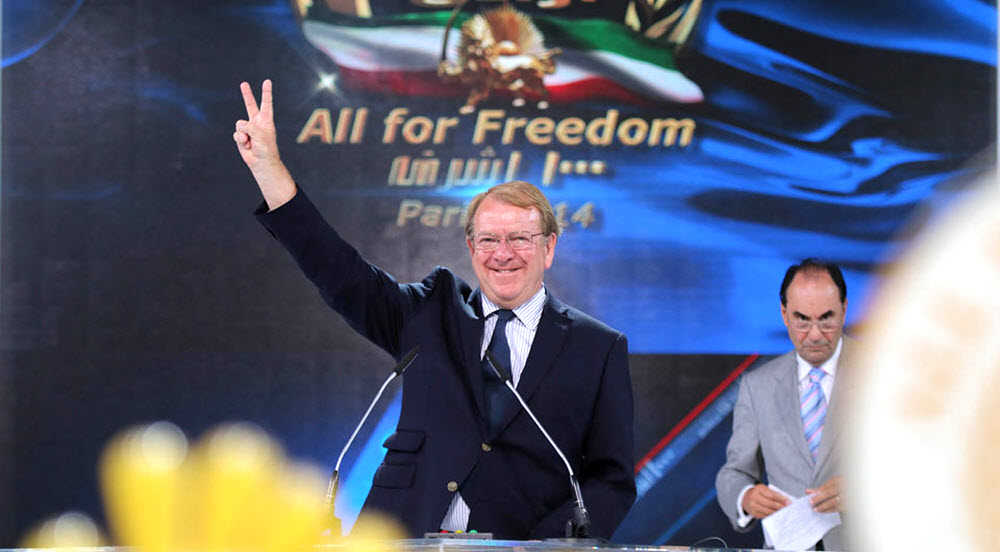 On October 13th, the Trump administration announced new sanctions against Iran’s Islamic Revolutionary Guard Corps as part of Trump’s broader agenda to get tough on Iran for its support for terrorism in the Middle East.

Experts say this will hurt Iran’s already problematic economy and may cause the IRGC to retaliate against US military forces in the Middle East.

However, many leaders praise the move.

One such leader is Struan Stevenson, former member of the European Parliament, who also chaired the Friends of a Free Iran intergroup during his time as an MP. This group became the centre of pro-democracy campaigns in Europe in support of human rights in Iran. He also chaired European Parliament’s official Delegation for Relations with Iraq. Presently, he is President of European Iraqi Freedom Association (EIFA).

The following statement was issued by Mr. Stevenson:

The European Iraqi Freedom Association (EIFA) welcomes the new strategy adopted by the US on Iran. In particular the designation of Iran’s Islamic Revolutionary Guard Corps (IRGC) as a terrorist organization by the US treasury has been warmly welcomed in the region.

The Quds Force, which is a special unit of the IRGC responsible for extraterritorial operations, has been the main sponsor of terrorism in the Middle East, particularly in Syria and Iraq. We call for firm action against the IRGC-Quds Force and its immediate expulsion from these two countries.

We strongly condemn the presence of the terrorist Hashd al-Shaabi group under the command of the Quds Force and their commander General Qasem Soleimani in Iraq, especially in the regions which have been liberated from ISIS (Daesh) and also in Iraqi Kurdistan.

Hashd al-Shaabi in Iraq is really part of the IRGC and its presence in that country will greatly increase the tension, loss of innocent lives, increased repression and killing of Sunnis and Kurds.

We call on the US government to intervene urgently. The implementation of the new US strategy on Iran and its IRGC will have to begin immediately in Iraq and Syria.

Another leader who is heralding the move against the IRCG is Dr. Alejo Vidal-Quadras, a Spanish professor of atomic and nuclear physics, who was vice-president of the European Parliament and is currently president of the Brussels-based International Committee in Search of Justice (ISJ).

He delivered the following i speech about the Iran regime’s Islamic Revolutionary Guard Corps (IRGC), at a meeting organized by the Belgian Committee of Parliamentarians and Mayors for a Democratic Iran in Belgian Parliament:

Today I want to briefly speak about Iran’s Islamic Revolutionary Guard Corps (IRGC), you know that this body, is an armed body that was established since the beginning of the revolution protect the Iranian theocracy and its supreme leader. This is also the force that is tasked with repressing the people inside Iran.
Our organisation, the International Committee in Search of Justice (ISJ), published an extensive study on the IRGC earlier this year.

We published it in March, you can find these reports on our website. In this report we have tried to explain fact and figures about the role of the IRGC in the Iranian politics, Iranian foreign policy and also Iranian economy. In order to know well the regime, it is absolutely necessary to understand the key role of this body. IRGC is directly involved in the hidden occupation of four countries in the Middle East which are: Iraq, Syria, Yemen and Lebanon.

IRGC has many centres in Iran where they train foreign militias. And these militias work to consolidate the Iranian regime’s hegemony of the Middle East. Every month, hundreds of forces from Iraq, Syria, Yemen, Afghanistan and Lebanon receive military training and are subsequently dispatched to wage terrorism and war.

In many countries of the region, the IRGC has effectively taken control of the foreign policy through the Iranian embassies in these countries. So they exploit diplomatic immunity to do all kind of espionage activities.

I should point out that while the IRGC is the most significant economic powerhouse in Iran and has dedicated its financial and economic skill to meddling in other countries, the extensive scope of the meddling has been a very heavy burden on the Iranian economy.

Over the past five years, Tehran has spent over 100 Billion dollars for IRGC operations in Syria alone. The money is spent on obtaining weapons and paying for the Syrian army’s expenses. They spend about 1Billion dollars a year to pay salaries for their affiliated forces.

The IRGC has its own intelligence unit and has expanded its espionage throughout the region. It has set up various intelligence posts in a number of countries and they operate as a very active intelligence network in the region.

In Europe, they have been involved with Cyber-attacks. Last week, British media confirmed that IRGC’s cyber army had attacked email accounts of British MPs, including Prime Minister Theresa May. The German anti espionage agency reported recently that it had observed sophisticated cyber-attacks by IRGC on German business and companies.

In our study, published in March this year, we recommended that the IRGC should be put on the terrorist lists in United State and in Europe.

Last week, the United States put the IRGC on the Terrorist list. This was a very good news and a very significant step forward. The people of Iran or at least a large part of them receive this with great satisfaction, as the majority of Iranian people really hate and IRGC.

In Europe because of the enormous trade interests of some big countries and EU’s close relations with Tehran, the European governments wish not to annoy the mullahs and practically have closed their eyes to human rights violations. This is morally wrong and strategically harmful and dangerous.

Since the IRGC is now labelled as a Specially Designated Global Terrorist organisation by the US Treasury, the European companies trading with Iran will seriously risk of being sanctioned by the US, as the IRGC runs most of Iran’s economy.

I believe we must warn our governments in Europe of the consequences of their trade links with the regime in Iran. Instead of dealing with this old despotic regime, we should invest in the future free Iran by helping the Iranian people to achieve democracy.