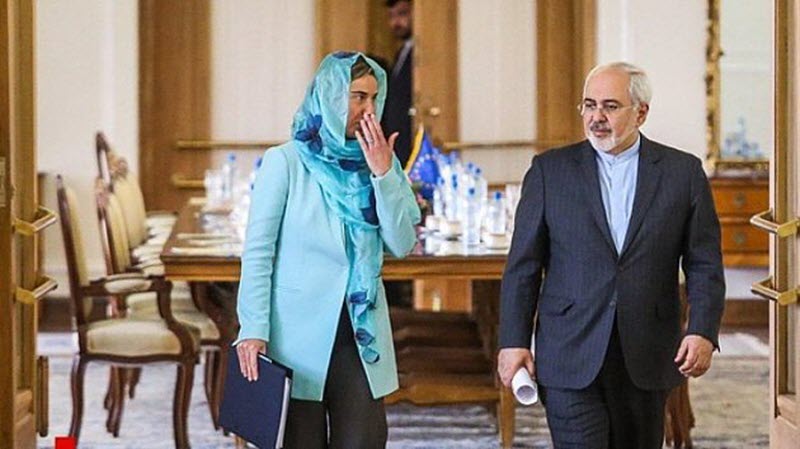 Rival factions in the Iranian Regime are reportedly divided over their relationship towards European countries, including the opening of a new EU office in Tehran.

As the US prepares to impose additional sanctions on the Regime or walk away from the 2015 nuclear deal altogether, Europe (especially France) has been attempting to find the middle ground i.e. keeping the US in the pact, so that European trade deals aren’t scuppered, and advocating for a stricter, more regulated deal.

This tells the Regime that if they want to keep the benefits from the existing deal, they must agree to quit their ballistic missile programme, stop interfering in the affairs of foreign countries to destabilise them and pull Regime forces out of Syria and Iraq.

Regime members close to Supreme Leader Ali Khamenei are rejecting any negotiation over the terms of the deal, specifically the ballistic missile programme, and criticised the opening of the EU office as it would mainly be dealing with matters relating to human rights which are notably poor in the country.

However this office would only be opened if Iran agreed to additional restrictions on its missile program and regional destabilisation.

The National Council of Resistance of Iran issued a statement that read: “The reason why the group close to Khamenei reacts hysterically with regard to opening the EU office in Tehran, is because [it acts as] a symbol of regime’s acceding to second and third deals. As a result… [It] could imply that secret talks between the regime and the EU are underway.”

Even those loyal to Hassan Rouhani have called this potential office a “ransom”. Please remember that these factions are not divided as moderates and hardliners- there are no moderates in the Regime. The Rouhani loyalists simply know that if the Iranian Regime loses the trade deals with the EU (and other international companies) then the Regime will crumble again. That is why they are prepared to accept this office.

Indeed, while those loyal to Khamenei have criticised the proposal, the man himself has remained silent. He has ultimate control over the Iranian Regime and his word is law, so this could signal that he has given Rouhani the go-ahead to move forward but- as the Regime did in the nuclear talks- will be operating a Good Cop/Bad Cop routine with the West.

Khamenei will outwardly act as if he disapproves of the deal and lash out at Europe and Rouhani over the crossing of red lines in Regime policy but he will ultimately be steering Rouhani’s hand.