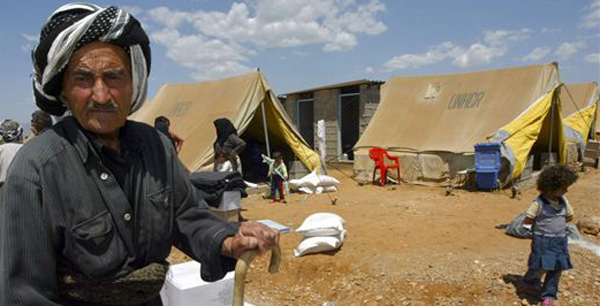 Stop Fundamentalism – As Iran continues to shell the Kurdish region of Iraq along its border with this country to eliminate the Iranian Kurdish opposition group PJAK, hundreds of residents in the region are forced to leave.

The displaced families are staying in tents near Bozan in Soran district and humanitarian groups express fear that disease may break in the camps they live in.

International Committee of Red Cross says it has provided food and basic hygienic necessities to some 600 people.  The supply should provide for a month says the head of ICRC’s sub-delegation in Erbil, Béatrice Oechsli.

The ICRC says in a statement on its website that these people are among thousands who had to leave their homes due to Iran’s shelling of the area.

“The ICRC will continue to closely monitor the situation, and stands ready to provide further assistance if needed,” said Béatrice Oechsli.

The International Organization for Migration says that many children in the camps are suffering from acute diarrhea as a result of using highly polluted waters from the streams nearby as their only source of water.  The IOM stresses that the most urgent needs for these families are medicine and purified water along with means of health care and medical attention.

There is also no electricity says ICRC.

The ICRC says it has provided humanitarian assistance to over 2500 people since the shelling began in July.

Many Clashes have been reporter between the Iranian military forces and the Iranian dissident PJAK forces in the area.

While the shelling has continued for months, Iraqi government is yet to make a clear stance against the Iranian government.