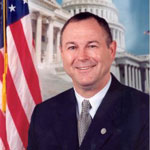 Stop Fundamentalism, 11 June, 2011 – The members of the Iranian opposition Mojahedin-e Khalq (MEK) in Camp Ashraf, Iraq which was the scene of a massacre last April leaving 34 residents killed and over 300 wounded are the subject of a row between an American Congress Subcommittee delegation and the Nouri al-Maliki government.

The delegation headed by Congressman Dana Rohrabacher (R-Calif.), member of the House Foreign Affairs Committee, traveled to Baghdad Friday requesting a visit to Camp Ashraf to find out what transpired there on April 8 when Iraqi troops using armored vehicles and live ammunition staged an assault on the unarmed residents of the camp.

In a press conference at the US Embassy in Iraq, Rohrabacher told reporters that, “We are investigating to see if criminal behavior caused the death of these noncombatants.”  He continued, “The killing of unarmed people, whatever your goal is, a mass killing like that, an intentional killing of unarmed civilians, is a criminal act, a crime against humanity, and we are on a fact-finding trip to see some of those details.”

The delegation had hoped to be able to visit the Camp on its way to Kurdistan but the Maliki government rejected the request.
Following the press conference by American Lawmakers, Iraqi government Spokesman Ali Al-Dabbagh told the US Embassy in Baghdad that the delegation should leave immediately, reports Kuwaiti KUNA News Agency.

“They are unwelcomed in Iraq from now on,” Al- Dabbagh said for the remarks on Camp Ashraf.  “Their demand to conduct an investigation in the raid is categorically unacceptable and has upset Iraq.”

The Iraqi government justified its attacks on the camp residents referring to the disputed US terrorist designation of the group.  “The MEK is recognized in the U.S. as a terrorist organization,” Dabbagh told McClatchy. “We would ask the administration whether they can accept a terrorist organization on U.S. lands. And if such an organization were on American soil, would you allow other countries to come and have a look at them, or is it exclusively a matter of the sovereignty of the United States?”

He said if the U.S. is concerned about the fate of the MEK members, “we would urge them to host them in the U.S. or in other countries.”
A high-ranking U.S. official proposed that the Iranian dissidents be moved to another location within Iraq, but the MEK rejected the proposal as equal to being sent to a concentration camp that would set the grounds for another and much bigger massacre. Dabbagh said Friday that the government could order this move if it chooses.

This is another evidence that the Iraqi government relies of the US terror tag to oppress the main Iranian opposition at the behest of the Iranian regime.  Many top ranking former officials have joined a large bipartisan group of members of Congress, calling for removal of the organization from the US terror list.

Camp Ashraf is the residence of the main Iranian opposition group in Iraq.  When Iraq was occupied by the coalition forces, they announced that they are not a party to the war and they are only there to overthrow the Iranian theocratic regime.  They agreed to turn their weapons in and United States accepted to protect them from attacks.
Since 2009 that the American forces have relinquished the role of protection to Iraq, the Iraqis so far have staged two major assaults on the camp killing about 50 people in total.

There has been a growing international consensus about Camp Ashraf massacre and the faith of the remaining 3400 residents of the camp in Iraq.  The European Parliament last month introduced an initiative to remove the residents and place them in EU and US.  But the proposal calls for an imminent need of protection for the camp residents to prevent another attack.

The Iranian regime has been calling on the Iraqi government to arrest and return the residents to Iran.  That action would surly result in the persecution of the dissidents.