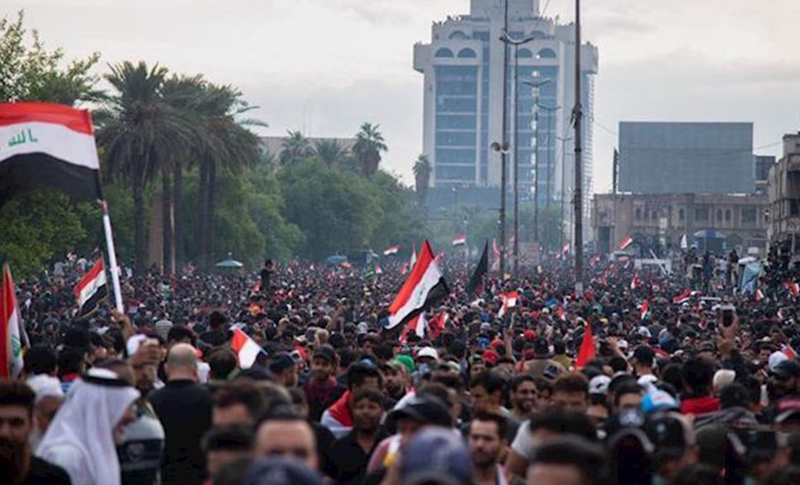 The Iraqi people’s uprising is continuing to unprecedented levels, the highest religious figure in Iraq Grand Ayatollah Ali al-Sistani called on the parliament to reconsider its support for the government, and the Iranian regime-linked Iraqi Prime Minister Adel Abdul Mahdi has announced his resignation.

On Friday, Ayatollah Sistani sent a message to his representative at the Friday prayers in Karbala, which expressed his sorrow over recent clashes especially in Nasiriyah and banning attacks against peaceful protests. He then called for Abdul Mahid’s resignation.

This is important because Sistani is the highest Shiite authority outside Iran and considered the leader of Shiite Muslims, so his comments against the Iranian regime’s meddling in Iraq are listened to.

The forced resignation of Abdul Mahdi – known for his close links to the “Supreme Council of Islamic Revolution in Iraq”, an entity founded under the direct orders of Iranian regime founder Ruhollah Khomeini – is a major victory for the Iraqi people and a strategic defeat for the mullahs’ regime, even though a new prime minister and cabinet have not yet been appointed.

It’s a major turning point in the Iraqi people’s uprising and many celebrated this victory, which was their paramount demand and delivers a significant blow to Tehran and the apparatus of Revolutionary Guards Corps (IRGC) Quds Force chief Qassem Soleimani.

Ayatollah Sistani also urged the Iraqi Parliament to adopt a new election law to meet the people’s demands and set the stage for free and fair elections.

His statement adds that the religious entities in Iraq will continue to support the Iraqi people and will not play any other role than providing advice because he emphasized that it is up to the people to choose the country’s path for the future and that no particular figure should have an undue influence on this process.

It is obvious that Ayatollah Sistani’s remarks are explicitly targeting Iranian regime Supreme Leader Ali Khamenei. Abdul Mahdi’s sacking was a red line for Khamenei in Iraq because it delivers a strategic blow to the mullahs’ influence in the affairs of their western neighbor. This will please the people of Iran, who want the mullahs to stop wasting their money on meddling with other countries, but will enrage the mullahs.