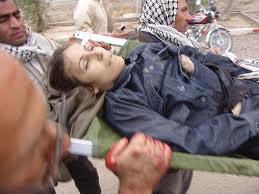 Stop Fundamentalism – In light of Dutch Appeals Court ruling about the responsibility of its government in the 1995 Srebrenica massacre, the National Council of Resistance of Iran (NCRI), in a statement on July 8, warned the U.S. authorities about shouldering-off their responsibilities regarding residents of Camp Ashraf.

Mrs. Rajavi, NCRI’s President-elect, was quoted in this statement, “Nothing can justify United States’ non-interference to stop crimes of Iraqi forces.”

The Iranian refugees in the camp in Iraq came under protection of the 4th Geneva Conventions after they turned their weapons over to U.S. forces after the 2003 occupation of Iraq by coalition forces.  Following the confirmation of their status by the United Nations, as the occupying force, U.S. forces assumed responsibility for protection of the camp residents. But, in 2009, the U.S. forces handed over the camp to Iraqi government.  Since then, the Iraqi army has twice raided the camp killing 47 unarmed defenseless residents. The latest attack caused an international outcry, condemning the actions of the Iraqi government.

“The Dutch Court ruling demonstrated once again that the United States is responsible for protection of Ashraf residents until their final disposition,” stressed Maryam Rajavi.

“Considering the indisputable and documented events during the years 2003-2011 in Ashraf, United States’ responsibility towards Ashraf residents is far greater than that of Dutch forces in Srebrenica,” said NCRI in its statement.

According to court’s ruling, the Dutch forces dispatched in 1995 to Bosnia as UN peacekeeping forces to monitor the situation during the siege of Srebrenica, were unsuccessful in protecting the lives of civilians against the danger of attack of Serbians in Bosnia.   The court found Dutch government responsible as they should not have handed the men over to Serb military in Bosnia.

Rajavi said, “The non-interference of the U.S. in Ashraf’s case is far more serious and unacceptable than the inaction of Dutch forces in Srebrenica tragedy.”

Mrs. Rajavi added, “The issue of Ashraf and preventing the massacre of its residents is the very test for the universal values that President Obama has committed himself to. Ashraf is an indicator for the Iranian people to judge as to which side the U.S. is on; on the side of the mullahs’ dictatorship and its proxies in Iraq, or on the side of freedom-lovers and those who struggle for freedom in Iran.”