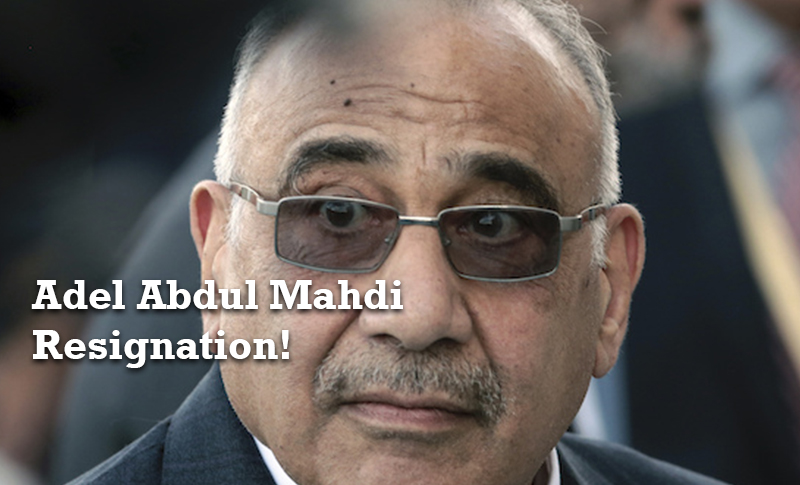 Iraq’s parliament has approved the resignation of Prime Minister Adel Abdul Mahdi following weeks of unrest. It is unclear who will take over from Mr. Abdul Mahdi. The parliament speaker said President Barham Saleh would be asked to name a new prime minister.

Pope Francis on Sunday criticized Iraq’s crackdown on anti-government protests, which have led to the deaths of more than 400 people since they erupted in Baghdad and other cities in October.

“It is with pain that I have learned of the protest demonstrations of the past days that were met with a harsh response, causing tens of victims,” he said at his weekly Sunday blessing.

According to sources, Iraqi security forces have used live ammunition, tear gas and stun grenades against protesters and last week saw some of the bloodiest incidents since the demonstrations began, with scores of people killed particularly in the southern cities of Nasiriyah and Najaf.

This is not the first time such violence has been reported. However, the situation in Iraq sparks a new era but it is important to emphasize Iran’s eviction.

The Iraqi people’s uprising is continuing to unprecedented levels, the highest religious figure in Iraq Grand Ayatollah Ali al-Sistani called on the parliament to reconsider its support for the government, and the Iranian regime-linked Iraqi Prime Minister Adel Abdul Mahdi has announced his resignation.

On Friday, Ayatollah Sistani sent a message to his representative at the Friday prayers in Karbala, which expressed his sorrow over recent clashes especially in Nasiriyah and banning attacks against peaceful protests. He then called for Abdul Mahid’s resignation.

The forced resignation of Abdul Mahdi – known for his close links to the “Supreme Council of Islamic Revolution in Iraq”, an entity founded under the direct orders of Iranian regime founder Ruhollah Khomeini – is a major victory for the Iraqi people and a strategic defeat for the mullahs’ regime, even though a new prime minister and cabinet have not yet been appointed.

It’s a major turning point in the Iraqi people’s uprising and many celebrated this victory, which was their paramount demand and delivers a significant blow to Tehran and the apparatus of Revolutionary Guards Corps (IRGC) Quds Force chief Qassem Soleimani.