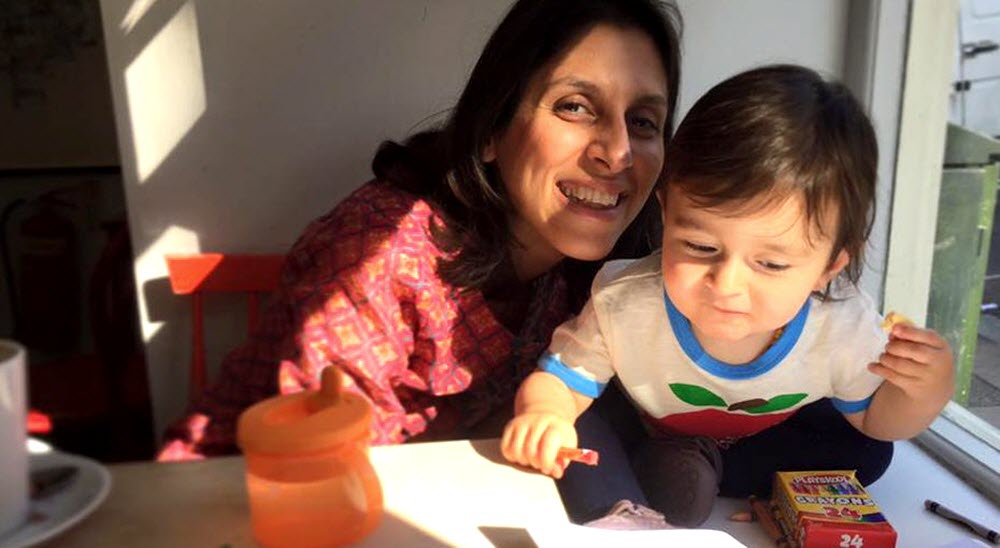 British Foreign Secretary Boris Johnson has been urged to retract comments that he made last week to the British Parliament committee regarding Nazanin Zaghari-Ratcliffe, who is currently serving a five-year term in Iran after being accused of espionage — charges she denies.

Johnson told the committee, “When you look at what Nazanin Zaghari-Ratcliffe was doing, she was simply teaching people journalism as I understand it.” Johnson added that he found the situation “deeply depressing.”

His comments could complicate the fate of Zaghari-Ratcliffe, as both she and her employer have always maintained she was simply visiting family while on vacation, not teaching journalism during her visit.

Zaghari-Ratcliffe was detained at the airport in Tehran in April 2016, where she planned to board a plane to return to the UK with her then 22-month-old daughter, Gabriella, after visiting family.

The Iranian government accused her of working for a UK media network involved in activities against Iran and sentenced her to five years in jail. Her child was placed in the care of her parents.
Amid growing criticism from fellow lawmakers and an outcry from Zaghari-Ratcliffe’s husband over his comments about a jailed British-Iranian woman, Johnson held a call with his Iranian counterpart Javad Zarif in an attempt to clarify his remarks and call for her release, while admitting that his comments to the committee “could have been clearer.”

His comments have apparently lead to Zaghari-Ratcliffe being summoned to an unscheduled court hearing in Iran over the weekend, at which Johnson’s remarks were cited as proof that she had engaged in “propaganda against the regime.” There are now fears that a longer sentence could be imposed.

Still, Johnson insists his comments should have no impact on her prison sentence. The UK Foreign Office said in a statement that during the call, Johnson “expressed concern at the suggestion from the Iranian Judiciary High Council for Human Rights that his remarks last week at the Foreign Affairs Committee ‘shed new light’ on the case.”

The statement said further, “The Foreign Secretary said this was absolutely not true. It was clear, as it always had been, that Mrs. Zaghari Ratcliffe had been in Iran on holiday when arrested,” and added, “The Foreign Secretary concluded by emphasizing that his remarks could form no justifiable basis for further action in this case and urged the Iranian authorities to release Mrs Zaghari Ratcliffe on humanitarian grounds.”

Johnson will travel to Iran before the end of the year to discuss the matter further, the Foreign Office said.

Prior to the phone call, Zaghari-Ratcliffe’s husband, Richard Ratcliffe, urged Johnson to retract his comments. “The worst thing the Foreign Secretary could do is to now suddenly go quiet and to create this problem without making any clarifications,” Ratcliffe told the UK Press Association on Tuesday. “I think that’s really important. You can’t make a muddle and then leave it. That would be the worst of both worlds.”

International Trade Secretary Liam Fox described Johnson’s remarks as a “slip of the tongue” and said that he did not believe it was a “serious gaffe.”

However, fellow Conservative MP Anna Soubry, writing on Twitter described Johnson’s remarks as “appalling,” and that “in ‘normal’ times” the Foreign Secretary would have been “sacked long ago.”

Opposition Labour lawmaker Yvette Cooper also made clear her disgust on Twitter, writing: “Hard to find words for how appalling this is. For him it’s just another lazy, arrogant failure to check facts. For her it’s incarceration.”

Zaghari-Ratcliffe has denied the charges relating to espionage, and has persistently maintained that she was in Tehran to visit family, and was not working in the country at the time of her arrest.

Monique Villa, CEO of Thomson Reuters Foundation, the charitable arm of the news service, who employed Zaghari-Ratcliffe, said in a statement, “Nazanin has never trained journalists in Iran and we are pleased that he has admitted to the Iranian Foreign Minister that she was in Iran purely on holiday.” Villa added, “It’s time now for the Foreign Secretary to meet Nazanin in jail, as he proposed last week, and to bring her back home.”

Iran’s Islamic Revolutionary Guard Corps (IRGC) opened a new case against her last month, accusing her of having joined organizations specifically working to overthrow the regime. Additionally, she was charged with having attended a demonstration outside the Iranian Embassy in London.

Iranian President Hassan Rouhani told CNN’s Christiane Amanpour last September that his hands were tied on the issue of dual nationals imprisoned in his country.

When the new charges were filed against his wife in October, Richard Ratcliffe said the British government should be doing more to help his wife, and that it should not be making business deals with the regime that imprisoned her.