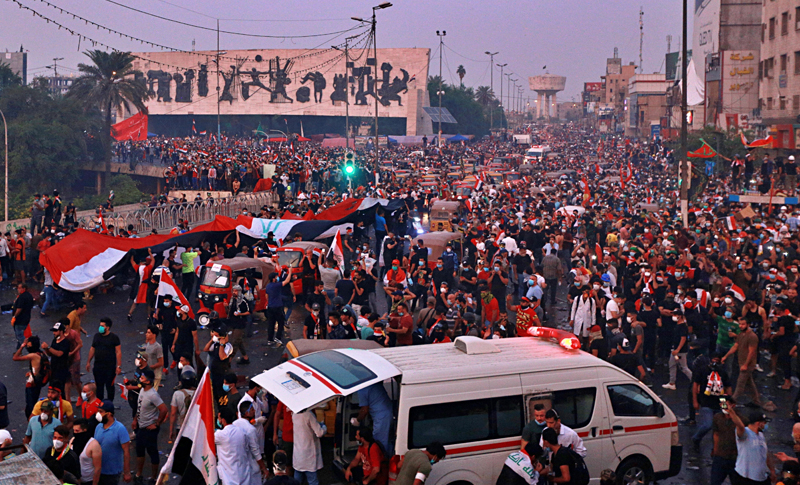 The deadline set by the Iraqi election law to specify a nominee for the vacant Iraqi Prime Minister post ended on Sunday, December 22.

Many protesters gathered on Sunday night in Tahrir and Al-Khalani squares in Baghdad and emphasized their disagreement with the candidacy of minister of education Qusay al-Suhail for the PM post.

Following Iraqi protests against the economic and political situation in the country and al-Suhail’s candidacy, the protesters blocked roads in various provinces.

Meanwhile, on Sunday, leaders of the Iraqi Building Coalition sent a letter to President Barham Salih and announced their support for al-Suhail’s candidacy. Leaders of the coalition are generally close to the Iranian regime.

The Iraqi parliament is supposed to hold a meeting for the final decision about the president’s demand to set up a majority coalition.

Regarding the political disagreements about the majority coalition, the Federal Supreme Court of Iraq previously announced that more than one or two lists must be created. The Iraqi Building Coalition says it has the majority of the parliament. This coalition has 150 of 329 seats in the parliament.

The coalition announced its support to Qusay al-Suhail, in a letter last night to Berham Saleh, but faced disagreement from the protesters.

This is while Barham Salih repeatedly stressed that if parties keep putting pressure on him he will resign. Last night Salih demanded again from the parliament to set up the majority coalition.

On the other hand, the Saeroun Coalition, led by Muqtada al-Sadr, sent a letter in the beginning of December to the president, announcing that they have a majority in the parliament.

Various sources say the situation is getting complicated and the answer of the Federal Court about majority coalition has returned everything back to square one.

According to security sources, security measures have been taken in Baghdad to confront any urgent event, thus the deadline for the appointment of a PM has ended.

Protesters in Karbala and Basra did the same thing and in Najaf province unknown people blocked the road to the airport.

With regards to the extensive presence of people in the streets, we can say that the main demand of the people is a popular PM who is against corruption, a PM who is not affiliated to Iran.