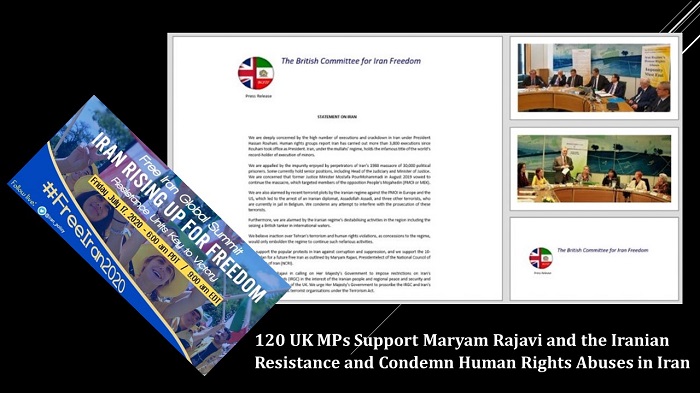 With only hours before the start of the Free Iran Global Summit, 120 bipartisan members of the UK Parliament issued a statement that condemned the executions in Iran ordered by the mullahs’ regime.

They are demanding that those responsible for the 1988 murder of Iranian political prisoners should be brought to justice.

120 cross-party Members of Parliament from the United Kingdom issued a statement condemning the executions carried out by the #Iranian regime. They are also alarmed by recent terrorist plots against #PMOI or #MEKhttps://t.co/k5Tv4QSDqn #FreeIran2020

They also responded angrily to the recent terrorist plots waged against the opposition People’s Mojahedin Organization of Iran (PMOI / MEK Iran) in Europe and the US by the Iranian regime. This has now brought about the arrest of an Iranian diplomat, Assadollah Assadi, and three other terrorists, who have been put into a Belgium prison.

This same committee announced that it fully supported Mrs. Maryam Rajavi, President-elect of the National Council of Resistance of Iran’s (NCRI) 10-point plan for Iran’s future. The MPs said they supported the protesters’ demands in November 2019 calling for an end to the religious dictatorship imposed by the regime’s supreme leader, and the IRGC

In the statement issued by the 120 strong groups, there was a reference made to the 3,800 executions that have been carried out since Rouhani took over as President. They also referred to the horrific massacre of 30,000 political prisoners in 1988 and the ongoing death threats leveled at members of the opposition People’s Mojahedin (PMOI / MEK Iran). The next reference made was the alarming rise in terrorist plots against the (PMOI / MEK Iran) in both the United States and Europe which in one case has brought about the arrest of an Iranian diplomat, Assadollah Assadi, and three other terrorists, who are all now being held in prison in Belgium.

The statement condemned any attempt to try to intervene, with the prosecution of these terrorists saying “if justice isn’t done it gives the regime the chance to have free rein in annihilating any opposition.” The statement supports the popular protests taking place in Iran that are against corruption and suppression, and it also supports the 10-point plan advocated by Maryam Rajavi, President-elect of the National Council of Resistance of Iran (NCRI), for a free Iran.

In its last words, the statement requested that Her Majesty’s (U.K.) The government recognizes the right of the Iranian people to bring about a democratic regime change so that it may achieve long-lasting democracy and freedom.