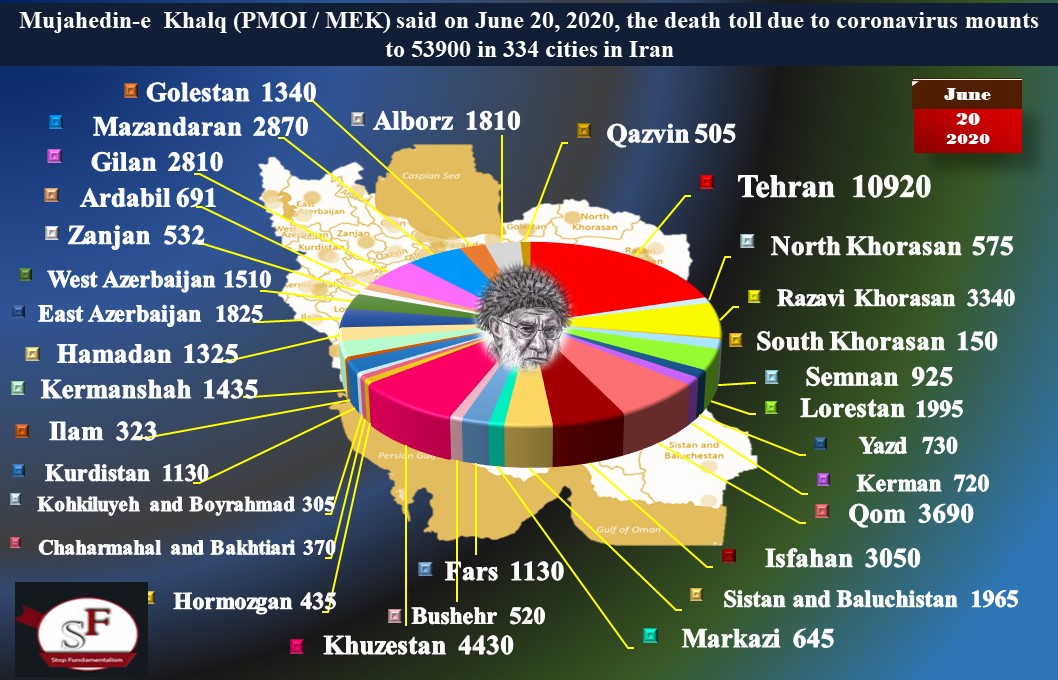 According to the People’s Mojahedin Organization of Iran (PMOI / MEK Iran) on Saturday, June 20th, 2020, the Coronavirus victims in 334 cities in Iran have increased to more than 53,900.

This is the death toll in some provinces:

Currently as well as 120 more deaths last Friday there have been 2,615 in the last few hours with 2,833 in ICU, as reported by the IRNA news agency.

At present 15 percent of the country’s COVID-19 patients are from Sistan & Baluchistan province.

The following cities have the most cases:

Most of the key officials around the provinces are kicking themselves for not acting more proactively at the start of the outbreak.

53,600 in #Iran died from #COVID19 by the novel #COVIDIOTS according to a report released Friday by the #PMOI #MEK #Maryam_Rajavi #NCRI): Facing such major crises, Khamenei and Rouhani use the #coronavirus to overshadow the public’s outrage https://t.co/bYdSM6FMKK @USAdarFarsi pic.twitter.com/k4nGsKc4OL

Doctors in Dezful said, “The number of patients is increasing every day, and the work pressure on Ganjavian Hospital is very high. Five physicians specializing in infectious diseases have been under severe pressure for the past four months.

In the city of Ahvaz, most hospitals are grappling with Coronavirus. From the beginning, Razi Hospital was dedicated to Coronavirus cases.

State-run TV in Khuzestan: A faculty member at Jundi Shahpour University of Medical Sciences said, “In April, the number of people with the disease was on average 30 a day for nearly a month, but, it is now over 600-700.

The deputy director of Health at Alborz University of Medical Sciences told the state-run website Tabnak, “We have entered the second peak of the Coronavirus outbreak.

The IRGC News Agency in Bushehr, Fars, reported, “Over the past week, an average of 227 people have contracted the virus in the Province every day, which means that Bushehr is going from red to a black state.”

The president of the University of Medical Sciences in Hormozgan told the official state agency, IRNA, “As a result of the increase in the number of patients, 200 beds have been added to the 500 beds for Coronavirus patients over the past week.

The deputy governor in West Azerbaijan, told Mehr official news agency, “The situation in West Azerbaijan is red, and the number of patients and the condition of those critically ill is deteriorating day after day.