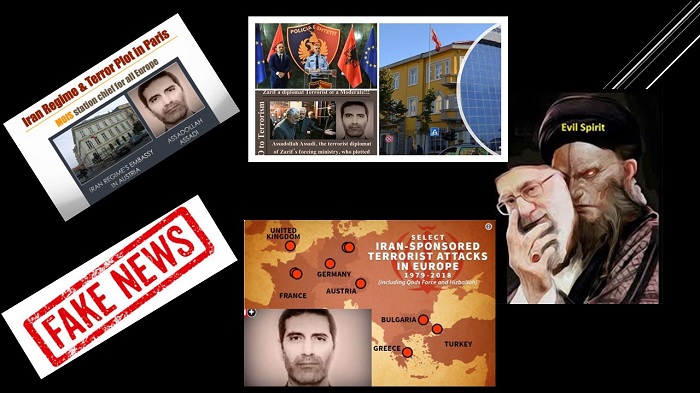 The Iranian diplomat who attempted to bomb the ‘Free Iran Rally’ back in 2018 in Paris is in prison for at least another year, according to the state-run Keyhan daily.

The National Council of Resistance of Iran (NCRI) organizes a Free Iran Rally every year at which many thousands of people attend, including supporters of the People’s Mojahedin Organization of Iran (PMOI / MEK Iran), international politicians and representatives of parliaments and governments from Europe, the U.S., Canada, Australia, and the Muslim world. Assadollah Assadi, a ‘diplomat’ based in Vienna, Austria, was arrested by German police when his attempt to organize the bombing of the rally was uncovered.

Belgium Extends Sentence for #Iran‘ian Regime Terrorist Involved in Plot Against Opposition Conference
According to Belga news agency, the verdict was given by the first branch of Antwerp’s criminal court. The verdict underlines that Assadollah Assadi, an Iranian regime… pic.twitter.com/u79YaJdjM5

Assadi, the regime’s choice of a so-called diplomat at the Vienna Embassy, was working for the Ministry of Intelligence and Security (MOIS). He had replaced an earlier operative, Mostafa Roudaki, who went on to become the regime’s intelligence officer in Albania, where the Iranian opposition (PMOI / MEK Iran) had their base at Ashraf-3. Fortunately, Roudaki was expelled by the Albanian government for terrorist activities in Albania. He was suspected of a failed attempt to bomb a March 2018 MEK gathering together with the Iranian ambassador to Albania, Gholamhossein Mohammadnia.

Assadollah Assadi played the role of Iran’s chief intelligence officer while working in Vienna. One of his jobs was to supervise acts of espionage and terrorism against members and supporters of the #MEK #Iran. https://t.co/F6ay3Tm5Pg #Iranian #coronavirus #FreeIran2020 pic.twitter.com/A62Z87q1Yt

The Assadi bomb plot was a stupid mistake. Assadi had given the bomb to other people who attempted to pretend that they were MEK supporters so that they could gain access to the rally. The two terrorists, Amir Sadoni and Nassim Nomeni were arrested by Belgian police before they could implement their plans.

The NCRI subsequently issued this statement: “The decision to commit this major terrorist crime was taken at the highest level of the regime, i.e. the Supreme Security Council, with the presence of Rouhani and Zarif, and was confirmed by Khamenei.

The submissive efforts of the Iranian regime and the lobbyists and regime allies to blame this terrorist act to the fake self-acting circles within the regime and to acquit Rouhani’s faction or Khamenei is so unfounded that with the slightest investigation its factitiousness is revealed.”

The Iranian regime stepped up its terror tactics against the supporters of the MEK throughout 2018 and beyond as it was terrified at the continued growth in the support for the Iranian opposition (PMOI / MEK Iran). This came as the regime made strategic errors, including its aggressive antics in the region, sanctions imposed against it by the U.S., and overreaction to legitimate protests made against it by the ordinary people of Iran.

The regime has more or less admitted that it sends agents undercover to carry out its aims outside of Iran. The former head of the MOIS made this revealing statement about the regime’s intentions: “The ministry needs cover for its works to collect information both inside the country and outside. It is obvious that we don’t send an agent to Germany or America and for example say, ok, I am an agent of the information ministry and I am here to collect information, please give that to me. He would work under the cover of business or other jobs including reporters. You know many of our reporters are ministry agents.”

Why did the Iranian regime risk trying to bomb the Free Iran Rally?

The Iranian regime made a fatal mistake trying to get an MOIS agent to pose as a diplomat, then orchestrate the attack on the Free Iran Rally. The fact that they did so just shows how desperate they had become and the fear they had of the growing strength of the Iranian Resistance, especially the leadership exemplified by Mrs. Maryam Rajavi, the President-elect of the NCRI.

The “Free Iran Summit” this year is of utmost importance

The 2020 Free Iran Summit comes at a time when the regime in Iran is facing multiple crises, mostly of its own making. Corruption, economic mismanagement, obsessive lying, and oppressive tactics have combined with a disastrous strategy towards the Covid-19 pandemic that has alienated many of the Iranian people and has alienated the regime internationally. The regime is quite probably in the last stages of its existence as it faces further uprisings within Iran.

The main message of the Free Iran Global Summit will be that the regime is rotten and will fall soon. A democratic alternative is achievable. The international community should support the National Council of Resistance of Iran (NCRI) and the People’s Mojahedin Organization of Iran (PMOI / MEK Iran) and the Iranian people.