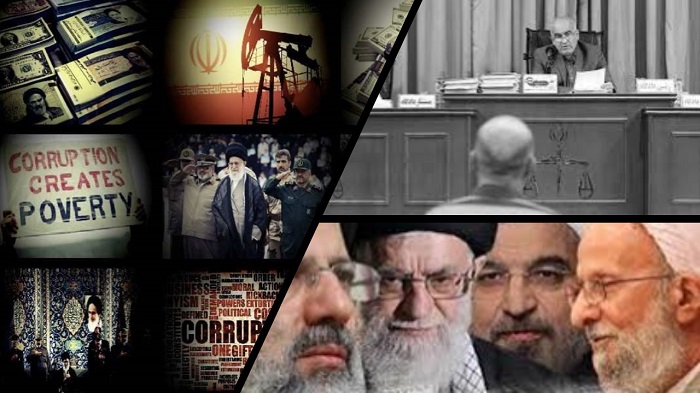 The chief executive of Iran’s Spec petrochemical company and his cronies were involved in a 6.656-billion-euro corruption case. This was reported by the state-run Asr-e Iran news website. This large amount of wealth equals all of Iran’s oil revenues collected in the 2019-2020 Persian calendar year.

Jalil Sobhani is the executive who has been named in this scandal, along with someone else who is not part of the regime who was detained concerning the criminal investigation into Akbar Tabari, the executive deputy of former chief of the judiciary, Sadegh Larijani. Tabari is allegedly so corrupt that whatever Sobhani is to be charged with, it will be far less than himself.

These huge amounts of money exchanging hands contrast markedly with the wealth of the ordinary Iranian, who struggles daily just to feed themselves and their families. It is mind-blowing watching these cases of corruption unfold while Iranians have to bear the brunt of galloping inflation and widespread poverty.

Protests across #Iran as regime officials voice concerns of a new uprisinghttps://t.co/svBXz50rBH

Bread goes up in price amid corruption scandals

While wealth is being distributed amongst the few, the many have to deal with the out of control price of bread, a bare necessity because of the outrageous cost of yeast which has skyrocketed recently from 600,000 rials to 3,000,000 rials.

Houses and home appliances have risen in price

Mohammad Eslami, the minister of transportation and construction, admits that rising costs are disturbing the nation’s peace. This includes housing and home appliances. Last Sunday, the state-run Jahan-e Sanat newspaper said that the government was responsible for these price rises because it had handed out permits allowing retailers to do so. This has made locally made goods up to 30 percent more expensive and goods manufactured overseas and smuggled in the country are experiencing a 100% rise in prices.

Diesel on the rise

Jahan-e Sanat also reported that diesel fuel may be the next product subject to a price rise. When this happened to petrol last November, a string of protests took place which brought out the Iranian regime’s most repressive crackdown. It led to the deaths of more than 1,500 protesters, while thousands more were imprisoned.

While the regime tries to fight off corruption or pretends it never happened, according to GholamrezaMesbahi Moghaddam, a member of the Expediency Council, two-thirds of the country’s population is on or below the poverty line due to mismanagement of the country’s wealth. The people aren’t going to put up with these hardships for much longer, especially as they see regime officials squandering the nation’s wealth in the absence of any records.