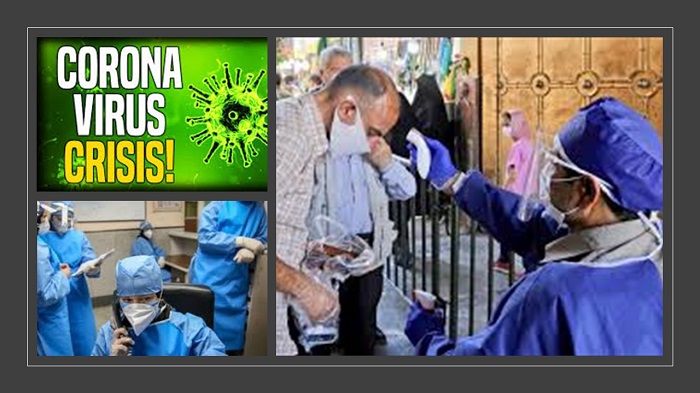 According to observations made by medical professionals, whatever the Iranian regime is saying about having complete control of the COVID-19 outbreak is simply untrue. It used this propaganda as an excuse to reopen the economy and get workers back to work. This was way back on April 11th. Warnings were issued at the time that there would be further cases of COVID-19 if the regime ordered the economy back to normal.

It was only yesterday when the reputable world news media, the Guardian, reported the surge in COVID-19 cases in Iran, even though the regime refused to admit this fact. All along, the regime is peddling disinformation about COVID-19 by saying amongst other things that Iran was barely affected by the virus despite having one of the highest death tolls in the world.

The #MEK #Iran has made a comparison between the failure to deal effectively with the #coronavirus inside the country’s prisons and its failure to control the socio-economic revolt outside in wider society. https://t.co/ANMwzoCbRI#IRGCTerrorWithoutBorders @USAdarFarsi #Iranian pic.twitter.com/GnEL6WPBOO

Cover up of date of the first case of COVID-19

February 19th was the first announcement released by the regime after two people died from COVID-19. This was misinformation as the first case occurred a month earlier which was confirmed in documents the National Council of Resistance of Iran (NCRI) managed to view. This is just one example of the regime’s cover-up to conceal the enormity of the virus.

Because the regime wanted to keep the COVID-19 spread quiet as the disease started to affect every city and territory in Iran, there always seem to be differences in official figures of those with the virus and died from with figures obtained from local sources like hospitals and morgues which always appeared far higher.

It got to a point when Tehran had so many cases that it couldn’t cover up the severity of the situation. One example of misinformation was in Qom where local officials reported 50 deaths while the regime’s Health Ministry thought it knew better and insisted the death toll was just 12 throughout the whole country. This sort of deception became the new normal for Iran as the virus invaded individuals and families throughout the country.

#Maryam_Rajavi the President-elect of the #NCRI #Iran described the increasing trend of the #COVIDー19 as the direct result of the criminal and inhuman policies of the Mullahs regime.https://t.co/VkE2zOogUr #IRGCTerrorWithoutBorders #Iranian #coronavirus #MEK @USAdarFarsi pic.twitter.com/GGMHYOoifk

Iran now near the top globally for COVID-19 deaths

Just yesterday, the Health Ministry’s estimated that deaths from COVID-19 stood at just 8,000. But on Friday, June 5, 2020, The (PMOI / MEK Iran) announced that the COVID-19 death toll across cities is over 49,500. the latter figure is consistent with hospital reports and figures released on international media channels so it is not just guesswork on the part of The (PMOI / MEK Iran), far from it.

Just two weeks following the regime’s first public statement about COVID-19, an Iranian nurse became a media celebrity when she posted video footage on social media channels pleading for help and urging the media to reveal the severity of the pandemic as she had experienced one hundred people losing their lives to COVID-19 in one 24 hour period. Sooner, and not later, the nurse was arrested and her story refuted. This just goes to show that the regime never had any intention of revealing the truth about the dangers of COVID-19 right from the start.