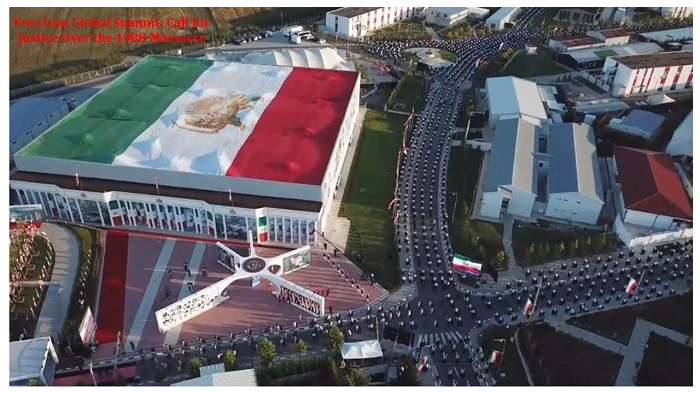 On Sunday, July 19, the virtual summit concentrated on appealing for justice for the 1988 massacre of 30,000 political prisoners. The NCRI calls for the international community to hold the Iranian regime’s officials accountable for this crime and bring an end to their impunity.

Comments made by attendees of the virtual summit:

“The greatness of Iran is still ahead of us and we will achieve it with freedom and democracy.”

“Men and women are rotting in cells because they have a different opinion. This must not be tolerated in the 21st century. I wish you victory in your struggle for human rights in Iran.”

‘’If you’re a supporter of human rights, you must be an opponent of the regime of Iran. History will show you are on the right side of history.”

“Our European government should support the extension of the arms embargo. We must do this for international peace and security and to support the Iranian people in their struggle for freedom and democracy.”

“Maryam Rajavi and her message of freedom make the regime change to its core. Her ten-point plan provides a democratic alternative for future generations of Iran and gives women a chance to lead their country. This is what we’re fighting for. Free and democratic Iran is within reach.”

“Let’s commit to being a force for change.”

‘’We will celebrate the end of this regime and the realization of the hopes of the people of Iran. It is my privilege to stand with you and your movement, the NCRI, and Madam Rajavi to hold the leaders of the regime to account.”

‘’The truth is that Iran’s criminal rulers massacred those affiliated with the (PMOI / MEK Iran) because the PMOI’s goals were popular in Iran.’’

“The more I looked, the more I found, the true story of the MEK has been erased and misrepresented. They advocate democracy and freedom of speech.”

“The crime committed against political prisoners in 1988 has been well established and documented. The UN and relevant institutions have been informed and received documents on this issue. We will continue our work with the Justice for the Victims of the 1988 Massacre in Iran (JVMI) and seek the arrests and prosecution in any court that accepts international jurisdiction. But our ultimate goal is a trial in the ICC. I am Hazer (ready) for this task.”

“We must not forget that even though this regime is cruel and brutal, it lies about many things, including its own strength. It is weaker than it shows and right now it is at its weakest. The international community must not fear the regime and should pursue justice.”

“We know who the oppressor is and what must change. You can’t lock up everyone and murder everyone. Freedom survives and the tide is changing. We remember those who died and sacrificed for the struggle. There must be justice.”

“The regime is frightened of the movement led by Madame Rajavi. Your movement is visible and present because of the sacrifices of the thousands of political prisoners and others who sacrificed their lives.”

Robertson read an excerpt from his book about the 1988 massacre, in which he had recorded the buildup to the executions and how the regime sent thousands of prisoners to their deaths without proper trial, without appeal, and without mercy.

“What the regime doesn’t understand is that Maryam Rajavi, the leader of this movement, is a woman who has suffered as much or more than anyone in her movement. She is the hope of millions. She is the key to freedom. She’s not a despot like her enemies. She’s a fighter for justice.”

#Iran: Ashraf 3 – Albania: Commemorating the 32nd Anniversary of the #1988Massacr of the Political Prisoners #FreeIran2020 https://t.co/GB3x7A2qpB

Maryam Rajavi, President-elect of the National Council of Resistance of Iran (NCRI)

Mrs. Rajavi described the 1988 massacre as “one of the most horrifying and indescribable crimes of the regime. By his fatwa sanctioning the 1988 massacre, Khomeini intended to annihilate the generation of the (PMOI / MEK Iran).” “But Massoud Rajavi’s name inspires the rebellion and the fight for freedom, just as his name inspired the perseverance and resistance of political prisoners during the 1988 massacre… there will come a day when his dreams of a free Iran will come true. Yes, the day will come when the flowers of freedom and popular sovereignty will bloom in Iran.”

“We human rights activists try to help those who defend liberty. Regarding Iran, there’s a chain of crimes against humanity. Not only those who have been executed but those who have disappeared. We don’t even know where their bodies lie.’’……“Torture continues even during the coronavirus pandemic. At this moment, Iranians are being tortured. More will be executed. We must not stop. The world must know what goes on in this country.”

Testimonies by witnesses of the 1988 massacre

“We were the generation who went to the execution chambers because we chose freedom. We chose this path with open eyes and full knowledge and decided to sacrifice everything for freedom. The world must know what happened to the (PMOI / MEK Iran) in the past 40 years. European leaders should know that when they shake hands with this regime, they must remember the suffering of the Iranian people. ‘’

DamonaTaavoni, MEK member and eyewitness to the 1988 massacre

“I’m here to be the voice of the 30,000 political prisoners who died. They made a decision to sacrifice their lives so people in our country don’t have to sell their body parts to put food on the table of their families.’’……’’ You will be held accountable.’’

Bahador Kiamarzi, MEK member and eyewitness to the 1988 massacre

“My father was executed shortly after along with 30,000 other political prisoners in the Iranian regime’s prisons. ‘’

“I was an engineering student in Tabriz after the 1979 revolution. I was arrested in 1981 for being a (PMOI / MEK Iran) supporter. I was tortured brutally in the first few days and saw interrogators torture other prisoners.“I was in prison for a short time before escaping but saw many cases of torture and brutality. I was given a death sentence under the charge of ‘moharebeh’. There was no court or lawyer and the interrogators decided the fate of prisoners.

The MEK will never give up their efforts to overthrow the regime. This regime has no other destiny. We and our people will achieve this.”