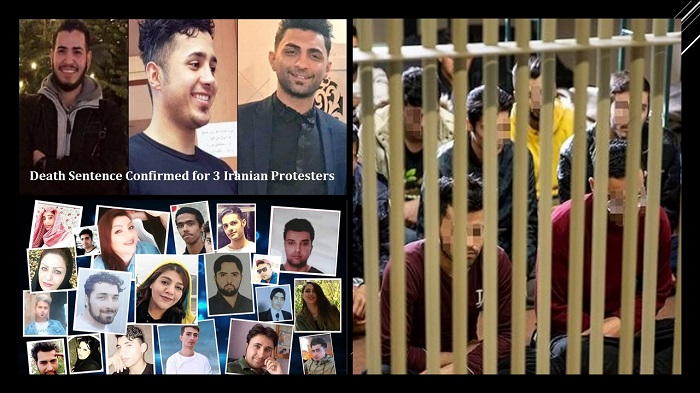 The three men, Saied Tamjidi, Mohammad Rajabi, and Hossein Moradi, were sentenced to death by a Revolutionary Court in Tehran. The judge, Abolghassem Salavati, has issued many death sentences before. He has a history for it and he was so well known that the U.S. Treasury Department put sanctions on him because as the Department said “censorship or other activities that prohibit, limit, or penalize the exercise of freedom of expression or assembly by citizens of Iran.”

The three accused prisoners say they have been badly tortured while in prison in Iran. Torture is a common form of oppression and repression used by the Iranian regime.

Allegations by the judiciary in Iran accuse the three young men of leading “riots” and had “set fire to banks and petrol stations during the nationwide protests and had filmed their acts and sent the videos to foreign media”. The sentence imposed was a prison sentence of between 11 and 16 years and flogging. The trial was “grossly unfair,” according to Amnesty International.

Hossein Moradi was identified using CCTV recordings made during the November 2019 uprisings. He was badly treated in prison, including being subject to physical torture.

Moradi was also pressurized in front of the camera. At one point he went very quiet then emerged after being given false assurances about his family. His false statements were disregarded after they had been made and Moradi was finally sentenced. He had “confessed” to events taking place that he later retracted. He was forced to appear on state-run TV supposedly making confessions in front of the media. The confessions, for what they were worth, were obtained by a kangaroo-style court in which he was effectively barred from telling the truth.

The other two young men who were arrested in June were also tortured and made to confess things that they had not committed, either at the place originally alleged or in front of people who knew who the alleged looked like.

All three defendants have said that they had no access to an attorney during the investigation.

Morgan Ortagus, a spokesperson for the U.S. State Department, called on Iran to stop executing its prisoners and repeal the death penalty.

Mohammed Reza Habibi, who is the Head of the Justice Department of Isfahan Province has threatened any protestors that they will be dealt with “decisively.” He said that those protestors who have already been in court before him had been sentenced “for corruption on earth.”

Floggings and beatings often used to extract confessions have continued apace in Iran since the November 2019 protests and arrests that continued into the early months of this year. Even peaceful activists have been targeted. One example is that of a bus driver in Tehran, Rasoul Taleb Moghadam, who was given 74 lashes after attending a peaceful demonstration on Labor Day last year.

There have been numerous other instances when people have been sentenced to prison and have been flogged or lashed as part of their sentence. According to the Iranian Human Rights Monitor, there have been several cases where prisoners have been tortured so badly that they have died.

Another issue for Iranian prisoners is that they have had to face crowded and unsanitary conditions while incarcerated as well as be exposed to Covid-19, which has spread easily through the prison system. Most of these prisoners have had no access to basic medicine, showers, sanitary supplies, and doctors.

With the new wave of arrests & prison sentences in #Iran, the PMOI/MEK families & supporters are being pressured, intimidated & harassed. I urge the UN Sec. Gen., the High Commissioner for Human Rights to send a delegation to visit the prisons, prisoners and their families.

Mrs. Maryam Rajavi is the President-elect of the National Council of Resistance of Iran’s (NCRI): With the new wave of arrests & prison sentences in Iran, the (PMOI / MEK Iran) families & supporters are being pressured, intimidated & harassed. I urge the UN Sec. Gen., the High Commissioner for Human Rights to send a delegation to visit the prisons, prisoners, and their families.