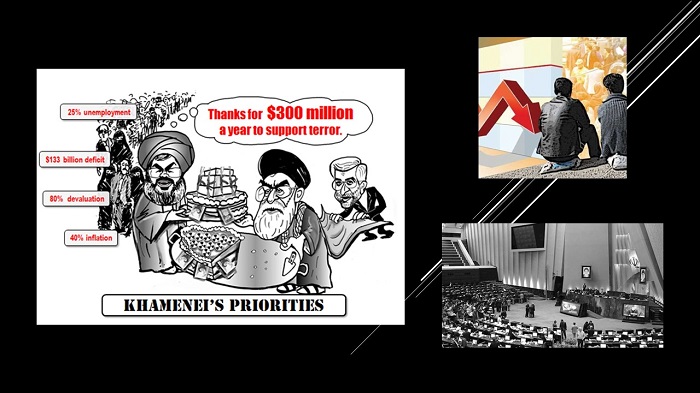 It has been the second week of the new Majlis (Iranian Parliament) and it has been quite a fiery one, with notable divisions, even amongst the ruling regime’s representatives. One thing that all the regime’s officials did agree on was that Iran’s economy is in shambles and not all of that can be blamed on Covid-19.

Fahrad Dejpasand, the regime’s economy minister, became a target in the Majlis for critics of the government’s woeful economic policies.

Dejpasand admitted that even if Iran could sell oil at pre-pandemic prices and at volumes that it did in the recent past, it would still have to rely on raising taxes.

More than 50,300 people in 327 cities in all 31 provinces in Iran have died from #coronavirus the disease caused by the novel coronavirus, according to the latest report from the #PMOI #MEK #Iranhttps://t.co/yw2ArQKQ7I #Iranian #NCRI @USAdarFarsi #MullahCovidHolocaust pic.twitter.com/wOECW3NeL4

Several MPs took the government ministers to task on the economic front. An MP from Sabzevar, Ali Asghar Anabestani, pointed out that raising taxes would lead to greater inflation and lower production. 3 million Iranian workers have lost their jobs as a result of the downturn experienced during the pandemic. Add that number to the 7 million Iranians who are already unemployed and it is a serious question of how increased taxation can be contemplated.

Another MP, who was a former economy minister, Shamseddin Hosseini, asked Dejpasand about the regime’s statistics. He wondered how Hassan Rouhani (the regime’s president) could come up with a figure of 1.8 million new jobs when the real situation was going in the opposite direction.

Iran’s economy is bankrupt, but why?

The two main reasons for the poor economic performance in Iran are corruption at the highest levels and Covid-19. The former is something that has been around for far longer than the latter and will no doubt last well beyond the suppression of the virus unless the regime falls.

The second week of the Iranian regime’s new legislature was marked with more infighting among officials of rivaling factions, something that has become a hallmark of the Majlis (parliament).#Iranhttps://t.co/Wg4DtK532o

MP Ghasem Mirzaei Nikoo gave an interview in the state-run Mistaghel Daily recently in which he despaired at the prospects of doing anything about corruption. According to Mirzaei Nikoo, corruption has become endemic in the country, a bit like the virus.

The economy minister, Dejpasand, admitted that the economy has taken a hit of at least 15 percent since the virus hit the country.

Is Iran heading in the right direction?

In response to the ever-deepening economic woes, Iran’s religious leadership has put even more power into the hands of its most reactionary elements, including the IRGC. Ali Khamenei, the regime’s supreme leader, has talked about a “young and hezbollahi” government, but the new Majlis has a lot of former Revolutionary Guards in it and is headed by none other than the former head of the State Security Forces, Mohammad Bagher Qalibaf. What these new members know about steering Iran in the right direction is anyone’s guess.

Khamenei might want to stack the new Majlis with his own choice of officials, but the virus doesn’t care. The only way to defeat the current health crisis is by listening to health experts, not military terrorists. Public trust in the regime is at an all-time low, so it is hard to see how Khamenei and his cronies are going to make any headway.

A constant challenge to the lies of the regime is now coming from the main opposition, the People’s Mojahedin Organization of Iran (PMOI / MEK Iran). The organization has been constantly updating Iranians with the true horror of the virus epidemic, providing realistic figures on Covid-19 infections and deaths across Iran. These figures have confronted the regime’s “therapeutic lies” that attempt to make the dire situation in Iran less scary than it is.

The opposition (PMOI/MEK Iran) has also been adamant about the regime’s excuses about the effects of sanctions on the country. The Iranian Resistance (NCRI) has clearly shown that the regime has far more funds available at its disposal than it says. Unfortunately, it chooses to spend much of its surplus on fomenting regional terrorism rather than supporting its citizenry. There was no need for the government to order Iranian workers back to work during a health crisis that could only get worse as restrictions eased.

Majlis Research Center: #Iran’s Economy in Freefall and Reaching Destruction
The country’s dire economic situation and all kinds of severe crises result from widespread corruption and the rule of the religious dictatorship. #IranProtests https://t.co/wD9AvTjZiR

Iran, unfortunately, is run by a regime that is not equipped to deal with the sort of existential crisis that is currently inflicted on it. “Iran’s economy has stalled, the people are poorer than ever, the country’s statistics are baseless, budget deficits are constant, and the Majlis has no power” admits the former economy minister in an interview with the Tasnim news agency.