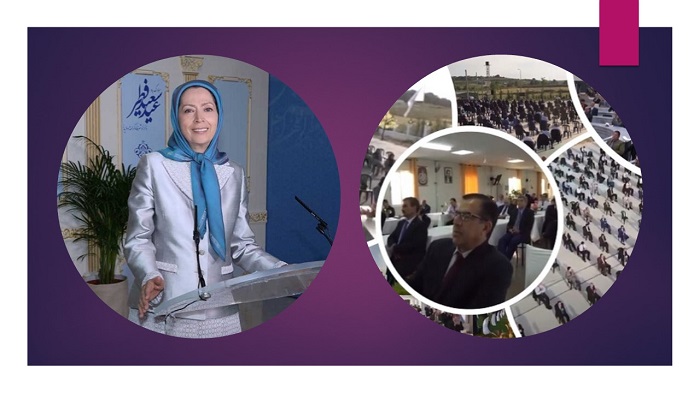 On the eve of Eid Al-Fitr, the President-elect of the National Council of Resistance of Iran, Mrs. Maryam Rajavi, sent a video message reminding the people of the real meaning behind the occasion. She also paid tribute to the founders of the People’s Mojahedin Organization of Iran (PMOI / MEK Iran), recalling their bravery, their courage, and their selflessness. They were executed on 25th May 1972 and the people and the Resistance have continued to fight for freedom ever since.

She started her speech by wishing a happy Eid Al-Fitr to those that spent the month of Ramadan fasting. Mrs. Rajavi said that the celebration is universal and one that represents freedom and the “true essence of humanity”. Eid al-Fitr, she said, is “the promise of certain triumph”.

Mrs. #Maryam_Rajavi: Eid al-Fitr celebrates humanity breaking free from chains of coercion and servitude. It is a celebration of the power of humanity’s willpower and its capabilities.https://t.co/sJWXwNApsf#Iran #MEK #coronavirus @USAdarFarsi pic.twitter.com/690uOttp5v

Speaking about the founders of the (PMOI / MEK Iran), Mohammad Hanifnejad, Saeed Mohsen, Ali Asghar Badizadegan, and their colleagues Mahmoud Asgarizadeh and Rasoul Meshkinfam, Mrs. Rajavi highlighted that their sacrifice “opened a new chapter” in the history of Iran. Even though the people of Iran are going through tremendous turmoil at the minute, the calls for freedom are still very much present.

Mrs. Rajavi spoke about the regime’s neglect to control the current pandemic that has so far claimed the lives of more than 47,500 people. She said that the regime is entirely responsible for the extent of the crisis and the people are not going to forget the impact it has had on them. This has resulted in the regime realizing that another uprising is going to emerge imminently.

Concerning the regime’s negligence during the Coronavirus outbreak, Mrs. Rajavi pointed to examples of its malign policies. For example, the regime did not allocate a minimum budget for treating patients, nor did it use the resources that the IRGC was stockpiling and keeping from the people. The regime has even refused to free any funds from the Supreme Leader’s extremely wealthy Setad organization. All it did was increase the price of food and other commodities.

The people have suffered in many ways since the beginning of the outbreak and the government has done nothing to help the people it should be protecting.

The MEK’s Resistance Units across the country have been working tirelessly to keep the flame of resistance burning. Mrs. Rajavi highlighted that the regime – the enemy – is becoming exhausted and its usual tactics of suppression are doing nothing but making the people and the opposition more determined than ever.

“Yes, today, it is this rebellious and enthusiastic generation and Resistance Units who have forged their iron resolve even more, and have risen to overthrow the religious fascism.”