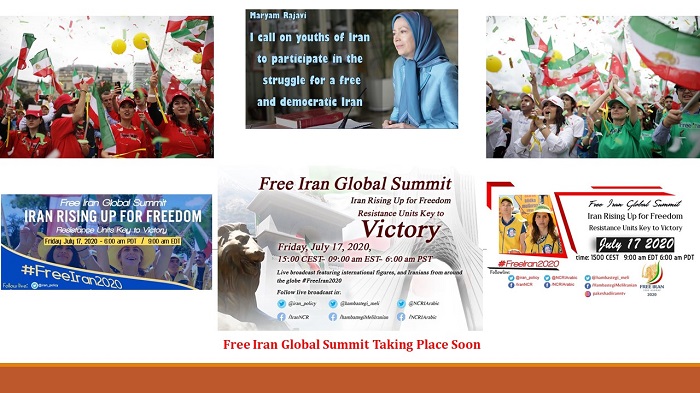 On July 17th those who support democracy in Iran will be taking part in a series of meetings across five continents. This event is organized by the National Council of Resistance of Iran (NCRI) and the supporters of The People’s Mojahedin Organization of Iran (PMOI / MEK Iran).

Due to the presence of COVID-19, it will take place online and not as live events that have taken place in the last 15 years. The expectation is that there will be more attendees than those attending the meetings at a venue in France as in previous years. These rallies normally attract a large number of people and it is expected that this different way of holding rallies doesn’t mean there will be less support.

It is expected that there will be more dignitaries addressing the global online summit from Washington, Paris, Berlin, and other world capitals than usual. This sort of support no doubt is worrying for the Iranian regime’s support. Often, the Iranian regime uses summertime to increase its oppression of the Iranian protest movement, but since 2018 it has been focusing on the annual Free Iran Rallies outside of the country.

In June 2019, European authorities confronted an Iranian-Belgian couple at France’s border who were trying to get to the free Iran rally venue. In their vehicles were found 500 grams of the high-explosive TATP and they were also given bomb-making materials by an Iranian diplomat called Assadollah Assadi, who was then serving in Austria. The position up to today’s date is that the three culprits are now awaiting trial in Belgium.

This bombing event was one of many that that had been attempted in 2018. On top of this was a rise in repression of the Iranian people at home which coincided with an increase in support for the (PMOI / MEK Iran).

Repression in Iran on the rise

As the free Iran online summit draws closer the Iranian regime steps up its terrorist campaign against the (PMOI / MEK Iran). This has included many reports about harassment, arrests, and prosecutions of political prisoners’ family members and anyone they know. In fact, they are so serious about their attacks against the MEK that their repression has increased which is so bad that it is a violation of freedom of speech and freedom of association. As more and more MEK activists are imprisoned there is a higher chance of human rights abuses.

Sadly, at this time of year in 1988, the clerical regime killed more than 30,000 political prisoners and even to this date no one has been held responsible for these atrocities.  The NCRI has appealed to the international community time and time again to instigate an UN-led inquiry so that those murderers can be prosecuted through the International Criminal Court.

It is important for Western nations to monitor the repressive activities in Iran as if it gets out of control could spread to places outside Iran.

Mrs. Maryam Rajavi, the President-elect of NCRI, once said: “The Iranian regime’s representations are epicenters for espionage and terrorism. Most regime diplomats are either Intelligence Ministry agents or IRGC officers or have received training on terrorism and espionage to serve that purpose.

With the Iranian people calling for the mullahs’ overthrow in the streets, it is particularly important to adopt a decisive policy vis-à-vis the regime’s terrorism and shut down its embassies in other countries.”