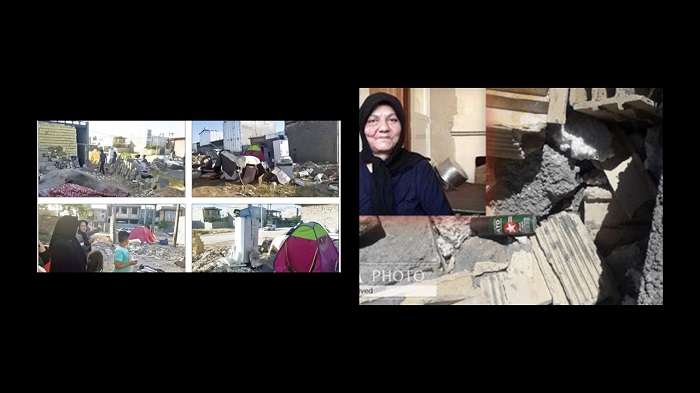 The Covid-19 global outbreak has been felt all around the world and it has brought about unprecedented economic problems such as job losses which deprive people of an income they need to survive. Unfortunately, the reaction from the Iranian government doesn’t consider these matters or health risks when it told people to return to work. The (PMOI / MEK Iran) announced on Tuesday, that the Coronavirus death toll in Iran has surpassed 48,800.

On May 19th, agents of the third municipal district of Kermanshah, raided Fadak Township using loaders and bulldozers. Without telling the residents, they razed the small home-built houses of the slum dwellers while they were asleep. They tore off the roofs leaving these people surrounded in rubble and the remains of their possessions.

Asieh Panahi, 58, who is the mother of 4 daughters and 3 sons, resisted this action but suffered a fatal heart attack after she was sprayed with pepper gas. As usual, there was no transparency, but the regime’s agents claimed that Ms. Panahi was an addict who had been arrested but died while being taken back to a rehabilitation camp in Cheshmeh Sefid.

No one believed this story

It wasn’t until late last week that regime officials finally admitted that the 58-year-old mother was murdered. Reza Salehi head of Kermanshah’s Razi University Bassij was recorded in a video clip sent to Farhikhtegan Online which said when the Municipality’s Implementation Unit was dispatched no information had been passed on to the residents in advance that their properties were about to be razed so they had no chance to secure their personal belongings. Salehi also mentioned unreservedly that municipal agents used anti-riot equipment which included pepper gas, batons, etc. so that they could evict the residents of Fadak, and that a 58-year-old Kermanshahi woman was murdered by pepper gas. Fadak Township residents said that Asieh Panahi had only occupied the house for four days before the invasion. She told the invaders that she suffered a heart problem so she couldn’t be sprayed with pepper.

According to a report from a Fadak township resident, it said that Asieh was determined to resist the invasion, but no one saw how she ended up in the loader’s fork. After destroying her house, they pushed her and her daughter into a van and left. Not long after, reports were received saying she had died.  Following her death, video clips and photos of the incident were circulated through the media and the internet, hailing this women’s courage for standing up to the repressive agents of the regime.

Ali, one of the residents of Fadak, explained on the state-run Entekhab website that everyone was asleep when the onslaught took place and no one had been warned. He said his 25 meter home was sprayed through the window while more than 100 agents had surrounded it. Ali’s wife said that this all took place in the last days of Ramadan. The worst thing about it she said was they were unable to retrieve their possessions, but all they owned was ruined.

A reporter revealed on the state-run Entekhab website on May 30th, after a visit to Fadak after Asieh’s death, that all the community’s houses and possessions had been destroyed, leaving people to walk around in a daze.

An unacceptable fact about Iran is that 38 million people live in slum dwellings, including Fadak. Sadly, this is a result of the regime’s determination to maintain inequalities and for a country as wealthy as Iran there has been no desire to rid it of inequalities. Even Tehran’s governor isn’t afraid to admit that 4.5 million of Tehran’s residents live on the margins in old and ragged areas of the city.

The remarkable change in tone demonstrates that dissatisfaction with the Iranian regime is so universal that the mullahs are no longer able to censor their own media from broadcasting it. https://t.co/XvJfitgV0P#Iran #Iranian #Covid_19 #MEK @USAdarFarsi pic.twitter.com/T8sEGigFmt

According to Mohammad Reza Mahboubfar, Urban and Regional Crisis Management expert, living in slums had risen dramatically between 2017 and 2020. Now, 45 percent of the population lives in this way. He said this was due to poor management by the regime which could have been avoided had there been the wish to do so.

Mahboubfar also added that in 2017, 19 million Iranians resided in 3,000 slums in city margins and just two years later this number had soared to 38 million, indicating the rise in social inequality.