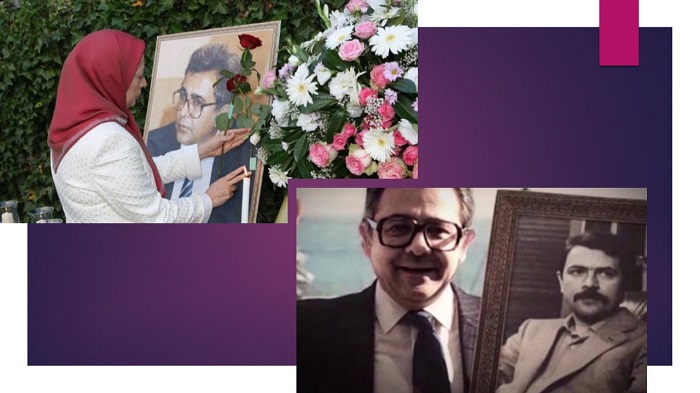 Professor Kazem Rajavi was assassinated on 24th April 1990 in Geneva, Switzerland. He was one of the most prominent human rights activists at the time and he was the brother of the leader of the People’s Mojahedin Organization of Iran (PMOI / MEK Iran).

At the time of his death, he was the representative of the National Council of Resistance of Iran (NCRI) in Switzerland.

The assassination plot was highly coordinated and the Iranian regime had certainly sent operatives to carry it out. The (PMOI / MEK Iran) has always been one of the regime’s targets and it has tried time and time again to obliterate the opposition. However, this has always made the Resistance stronger and more determined to succeed.

Remembering Prof. Kazem Rajavi on the anniversary of his flight on April 24, 1990. He said, “We write the history of human rights with our blood.”
Prof. Rajavi was assassinated in Geneva by terrorists dispatched from #Iran, for his efforts to defend the Iranian people’s rights. pic.twitter.com/h22K3YR3G6

Unfortunately, this is not the first assassination that the regime has plotted, and it has certainly not been the last. Scores of Iranians abroad have been killed, in particular intellectuals and activists from the opposition.

Inside Iran, the situation is much worse. Mass executions are carried out and tens of thousands of dissidents have been killed over the years. The executions still happen to this day and the regime no doubt continues because it is not being held truly accountable by the rest of the world.

The perpetrators of the assassination of Rajavi have also been able to get away with their actions. The investigation into his death revealed that there were more than a dozen operatives from several agencies and regime embassies that were involved in the plot. Swiss authorities identified 13 operatives that traveled to Switzerland on “service passports”. One of them was the regime’s then-Intelligence Minister Ali Fallahian. Warrants for their arrest were issued but the case did not advance much beyond this.

Commemorating Prof. Kazem Rajavi, the great martyr for #HumanRights in #Iran. A member of the National Council of Resistance of Iran (NCRI) and brother of Iranian Resistance Leader Massoud Rajavi, he was assassinated by Tehran terrorists on April 24, 1990. #FreeIran2020 pic.twitter.com/4Hr2oJUVyb

Two of the individuals were arrested in France but were sent back to Iran.

The fact that justice has not been done sends a very worrying message. It shows the Iranian regime that despite investigations and inquiries, the regime will ultimately get off scot-free.

The Swiss authorities recently notified the (NCRI) that it would be closing the case of the assassination of Rajavi because of a statute of limitations. This has caused outrage among many and there are calls for the case to be reopened.

It is not just the assassination of Rajavi that has gone unpunished, but there are also tens of thousands of other people that have been killed by the regime. Their families have never seen justice for their loved ones and it must be truly horrifying for them to hear that cases like these are going to be closed.

The decision by Swiss authorities is all the more troubling because Switzerland is a country that places great importance on freedom, equality, and the respect of human rights. To throw these values away is careless and inhuman.

If the case were to remain open, it would send a strong message to Iran that its impunity is going to end. This would be a major boost to the long-suffering people of Iran to know that their corrupt and brutal leadership is being condemned on an international scale.