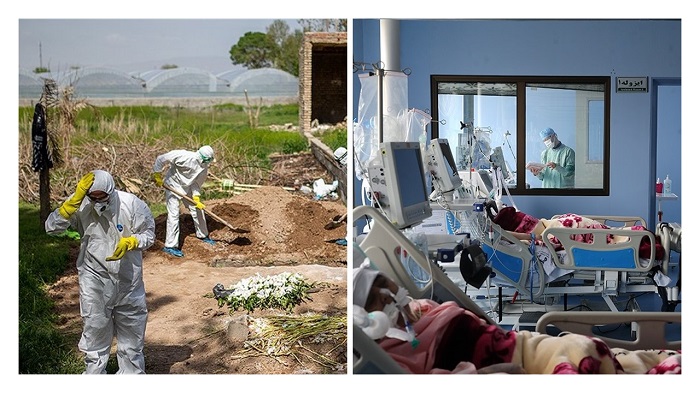 As the COVID-19 death toll continues to rise, rather than helping the people through these difficult times, the Iranian regime’s officials are blaming the increase on the people.

Because the Iranian regime tried to cover up and lie about the Covid-19 devastation in Iran, the virus became fast spreading. For several weeks, the regime would not announce a national quarantine, and when it decided to implement one there was no additional government aid provided. As more and more people were forced into poverty and starvation it was so afraid of a countrywide uprising that it told everyone to return to work.  This action has led to an even bigger spike in the infection rate. There will be no end in sight as holy shrines are opened again and even high-risk businesses have reopened as well.

More than 44,800 people have died of the novel #coronavirus in 323 cities checkered across all of #Iran‘s 31 provinces, according to the Iranian opposition PMOI/MEK. pic.twitter.com/9vfIPs1fin

Holy shrines offer both economic and political benefits to the regime, as they get money from them. They also attempt to manipulate people and get them to repress the ideas of others.

People not focused on protocols for Covid-19

Hassan Rouhani, the regime’s president, said he had been told that people were not observing the required Covid-19 protocols put in place to protect everyone. He has told the people if their behavior doesn’t improve he will be forced to return to more restrictions. He has said this in particular about the situation in Khuzestan province where Covid-19 is spreading like wildfire. He said if the rise in numbers continues more restrictions will be imposed on the province.

Rouhani is supposed to have written that “it is better to have 2 to 3 million people die of Covid-19 than to have 30 million starve to death.”  The IRNA reported on Monday that it was the hard economic climate that brought about the relaxing of Covid-19 such as not emphasizing social distancing rules. As there is no specific treatment available medical personnel are exhausted due to the extreme to conditions.

In this regard, Mrs. Maryam Rajavi, the president-elect of the National Council of Resistance of Iran (NCRI), said: “Insolence and projecting blame on others will go on ceaselessly until the regime is overthrown and is a well-known pattern of the anti-human mullahs who are the main culprits for death and destruction in occupied Iran.”

Iranian people have been grappling with poverty, and they are under tremendous economic pressure due to the regime’s institutionalized corruption and wrong economic and political decisions.

Many #Iranians followed the #MEK when it called for a regime change twice in the past 24 months. people will be furthering their cause for a regime change and there will be little anyone can do about it.https://t.co/PWGJq2Coqw#Iran #COVID19 #coronavirus @USAdarFarsi pic.twitter.com/MSlwAF46ri

The coronavirus outbreak and the regime’s mismanagement have added to the people’s misery, have increased their anger toward the regime.

The regime considers the Coronavirus crisis, like other crises, as a security threat and prioritizes its own rule over people’s lives. The decision to send people back to work confirms this.

The regime refused, to financially support people during the quarantining period, and this resulted in more people joining the army of starving people.

The regime fearing a nationwide protest such as the protests in last November, which shook the regime’s foundation, the regime forced people back to work. The mullah’s regime chose this path to prolong their rule even for days, despite knowing that this would increase social hatred toward the regime with more people dying due to the coronavirus mismanagement.