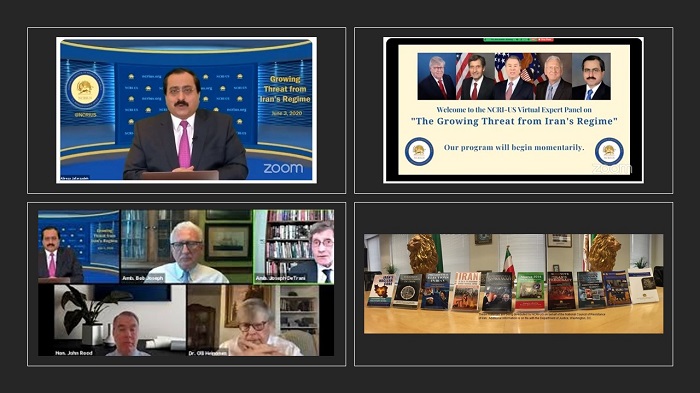 The National Council of Resistance of Iran’s United States Representative Office (NCRI-US) recently held a virtual conference. This was attended by well known U.S. politicians and the title of the event was “The Growing Threat from Iran’s Regime.”

Those who took part in this event included the following:

#Iran: NCRI-US held a virtual conference, attended by renowned American politicians, entitled: “The Growing Threat from Iran’s Regime.”
The panelists focused on the #Iranian regime and the threat it poses to the international community.https://t.co/c5aoclEqaT

The focus of the event was the status of the current Iranian regime and the threat it poses to the international community.

Some of the subjects included in the discussions were:

The moderator of the webinar, Mr. Jafarzadeh, began the event by highlighting the COVID-19 crisis in Iran. Despite the regimes downplayed death toll, the true figures according to the People’s Mojahedin Organization of Iran (PMOI / MEK Iran) are 49,500 dead. Mr. Jafarzadeh also mentioned the regime’s attempts to exploit the pandemic so that it could distract the Iranian people’s interest in a change of regime.

This is what Mr. Jafarzadeh said in his opening remarks.

“The world is dealing with the Covid19 pandemic and there is no exception with the case of Iran, but there is a big difference; everywhere else the governments are united with the people to fight the Covid19. However, in the case of Iran, the regime is united with Covid19 to fight the people. And that explains all the miseries, the high number of casualties, the cover-ups, and how the regime is viewing Covid19, and perhaps using it as an opportunity to exploit and put a cover on the uprising. Also, use it as an opportunity to get concessions and help from the outside world. They asked from the IMF 5 billion dollars as they are hoping to lift the sanctions on the Iranian regime under the cover of the Covid19 crisis.”