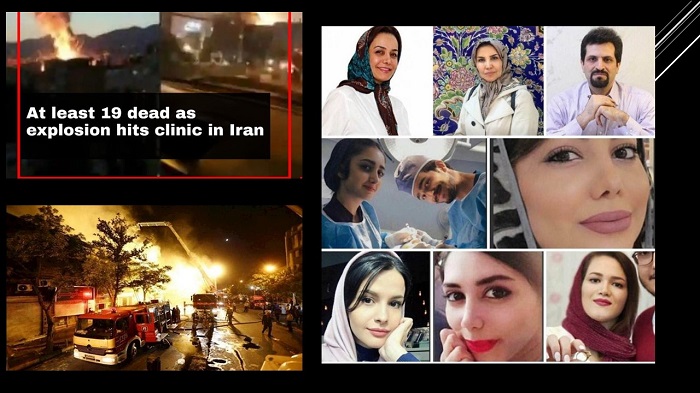 During the evening of Tuesday 30th June, a fire broke out after an explosion at the Sina clinic in the Iranian capital Tehran. The fire in the northern part of Shariati Avenue in central Iran resulted in the death of 16 women. There were 3 other deaths there and 14 people were injured.

The Women’s Committee of the National Council of Resistance of Iran (NCRI) has published the names of several of the people who died. They included anaesthesiologists Dr. Susan Soltani Mohammadi and Leyla Avazkhani, general surgeon Dr. Farideh Tourani, and operation room experts Maryam Khorsandi, Shabnam Diani, and Mohaddeseh Razi. Raha Nikravesh, another operation room expert, and her husband Ehsan Ganjkhanloo were also killed in the fire.

Women trapped in Tehran’s Sina Clinic fire attempted 2 get out by breaking windows w/ empty hands.
Instead of dispatching emergency forces 2 save victims caught up in fire, the regime sent security forces & intel. agents 2 prevent & quell protests by those afflicted by explosion pic.twitter.com/9UOtiZFH1b

The names of several others have also been announced. They are Ayda Zamani, Lida Kham Daii, Mojgan Dehghan, Yasaman (surname unknown), and Ms. Rahmani.

Reports indicate that some of the women that were trapped in the building by the fire tried to escape by breaking windows with their bare hands.

The explosion was so strong that the neighboring buildings were also damaged, according to Iraj Harirchi the Deputy Minister of Health.

The most shocking part of this story is that the regime immediately sent intelligence and security agents to the scene of the explosion instead of dispatching emergency forces to help save lives. This is an indication of the state the regime is in – sending forces to deal with the people instead of a help to rescue the injured and dying.

The deaths of these people have sent shockwaves across Tehran and further afield. The President-elect of the National Council of Resistance of Iran (NCRI), Mrs. Maryam Rajavi, has expressed her sympathy to the families who have lost their loved ones in this fire. She also sent her best wishes to the survivors and to the people of Tehran who are shocked by this tragedy.

My deepest sympathies go out to the families of the victims, particularly the patients,who lost their lives in the catastrophic fire in Tehran’s Sina Clinic. My heartfelt condolences to all the people of #Tehran. Wishing quick recovery of those hurt and injured in the fire. #Iran

Mrs. Maryam Rajavi pointed out that this incident, like many similar ones in the past, is completely preventable. She said: “This and other similar tragic incidents are preventable. The damages and destruction caused by floods and earthquakes as well as the ongoing forest and environmental fires indicate an enormously chaotic situation within the decadent clerical regime in its entirety. The mullahs and their IRGC mercenaries have plundered the nation’s wealth to the extent that they have left no room for reliable technical and professional services and reinforcing the infrastructures.” 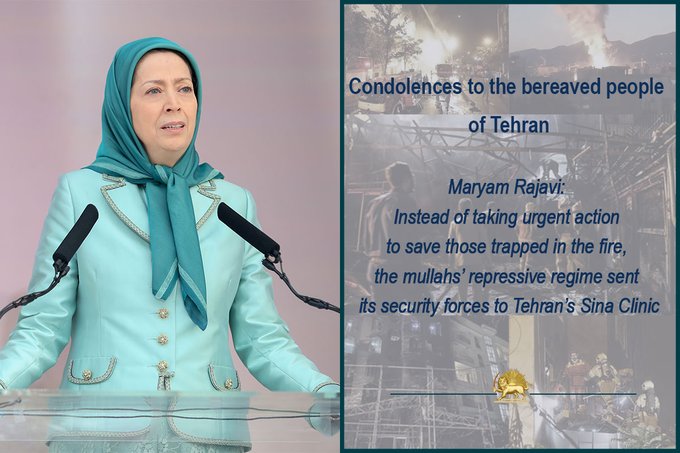 The Women’s Committee also extended its condolences, emphasizing that the people’s suffering will only end when the regime is replaced with a democratic government.

The Iranian regime’s corruption and mismanagement are destroying the country and the people are the first victims. The regime has provoked or worsened every crisis the people of Iran have lived through for the past few years.

It is no wonder that the people are desperate to see the regime collapse. They will no longer be intimidated by the regime and they have made it very clear that they will continue to dissent and voice their opposition to the mullahs regime and their support for The People’s Mojahedin Organization of Iran (PMOI / MEK Iran) until the day the regime falls.