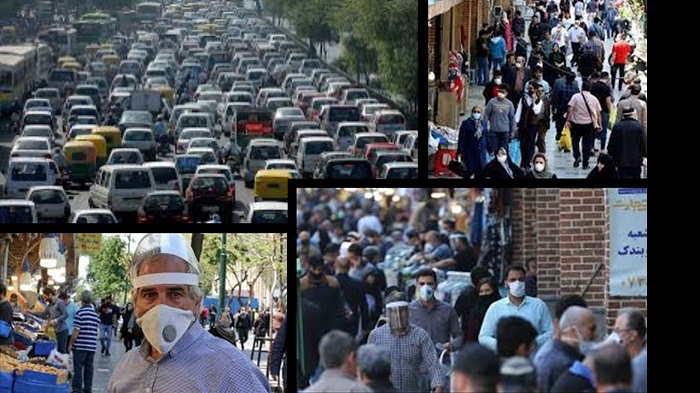 The Iranian economy reopened more than a month ago and more lives have been lost to COVID-19. The People’s Mojahedin Organization of Iran (PMOI/MEK) revealed up to Tuesday more than 41,000 Iranians had lost their lives to COVID-19. This has been exacerbated by the regime’s decision to force workers back to their workplaces.  The regime has failed to recognize this high death toll and is still insisting that it is only 7,000.

All along throughout this crisis the regime hasn’t taken it seriously. It refused to quarantine Qom, which was the first city to see cases of COVID-19. Also, it refused to release cash to the people to help them financially through this unprecedented crisis after Qom was eventually put under strict quarantine measures. Before COVID-19 unfolded in the country many of Iran’s citizens were experiencing financial hardships due to the economic policies of the regime.

As the crisis worsened, more people were going hungry. This is why the regime’s supreme leader, Ali Khamenei and Hassan Rouhani, the regime’s president told people they had to return to work despite warnings that there would be a rise in COVID-19 deaths. The regime feared a popular uprising.

Rouhani believed that COVID-19 was only a disease, but unemployment was far more serious and would lead to even more deaths. As the death toll rises and the state-run media reveals the truth and doesn’t cover up like the regime has been doing it is predicting a social uprising could happen.

Latest COVID-19 statistics throughout the country

The state-run ISNA news agency which received information from the Epidemiology Committee of the Health Ministry said that there was an upward trend taking place in 8 provinces, which includes:

A key member of the National Coronavirus Combat Taskforce (NCCT), Massoud Mardani, told the state-run daily, Donya-e-Eqtesad that Tehran, Gilan, Semnan, and Khuzestan provinces were experiencing exponential growth in the virus which was much worse than was expected.

Khuzestan Governor Gholamreza Shariati, who was interviewed by state-run Entekhab daily reported that the number of COVID-19 patients in Khuzestan had risen by 200% in the past month with the number in hospital up 60%.

Kianoush Jahanpour, the regime’s Health Ministry spokesman, posted on Twitter last Saturday that over the last day in Tehran and Khuzestan more than 50% of hospital referrals were COVID-19 cases.

The Epidemiology Committee of the #Iranian Ministry of Health has announced that in eight provinces, an upward trend has been noticed, or the beginning stages of a peak.https://t.co/s3LFSa4TrB#Iran #MEK #COVIDー19 #coronavirus @USAdarFarsi pic.twitter.com/m4vSoRo7rG

Mrs. Maryam Rajavi, the President-elect of the National Council of Resistance of Iran (NCRI), clearly blames the regime for the high number of COVID-19 cases. She emphasizes that the mullahs are only concerned about maintaining their rule and that the country’s wealth has been wasted on “unpatriotic nuclear and missile projects, as well as in the export of terrorism and warmongering.”

She pointed out that little help had been given to people affected by the virus despite the regime controlling hundreds of billions of dollars of public wealth. This is likely to lead to social unrest that has now scared the regime. One of the key regime officials, Ahmad Naderi, spoke to the state-run Resalat daily back in early March, saying he was concerned about the likely security and social outcomes that are likely to occur as a result of this health crisis. He predicted larger protests than those in 2018 and 2019 were likely to take place.