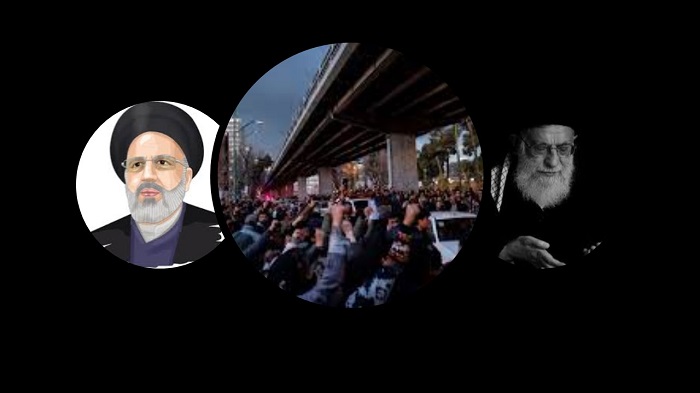 On the anniversary of Ruhollah Khomenei’s death, Ali Khamenei, the supreme leader, dared to praise Khomeini’s legacy of oppression of the Iranian people. He even described Khomeini as “young-minded,” who allocated key posts like the commander of the Revolutionary Guard (IRGC) and important judicial jobs to young Iranians.

In his speech, Khamenei made a point of mentioning the youth of Iran. As part of his tactics for the future, he is establishing what he calls a “young and hezbollahi government” that he hopes will get him out of the sticky mess he has got the country in.  Because he knows he has substantial opposition, he acknowledged this but didn’t specifically mention the People’s Mojahedin Organization of Iran (PMOI / MEK Iran). However, he did say any opposition was not large enough to be of any concern.

The suppression of the #PMOI / #MEK #Iran is the regime’s agenda since the beginning at that time – Khomeini – issued a fatwa in 1988 ordering the execution of all supporters of the MEK https://t.co/BZmHHV8zSz #IRGCTerrorWithoutBorders #NCRI #Iranian #coronavirus @USAdarFarsi pic.twitter.com/fE3P0FsylR

No mention of COVID-19 in Khamenei’s speech

Despite the huge death toll in Iran, this so-called regime leader didn’t even give it a mention or apologize for the reopening of the economy that has had a devastating toll on the Iranian people. What he did decide to mention was a criticism of the United States for failure to control the pandemic in its own country, despite all the warnings it had from other nations.

Even though President Hassan Rouhani said previously that Iran had managed to contain the virus, he is now admitting that the number of cases is on the rise and normal life is unlikely to resume any time soon.

Khamenei is so afraid of the rise in influence of the (PMOI / MEK Iran) and in particular the youth support that he is pretending he is going to bring about a “young and hezbollahi government.” This contradicts the MEK’s ideals of a free and democratic Iran.

Last Tuesday, Ebrahim Raisi, made famous for the 1988 massacre of more than 30,000 political prisoners, stood up for the mullahs’ crimes and said Khomeini was no less than a hero in how he waged war against the (PMOI / MEK Iran). However, Raisi did claim that Iran’s youth do not know who the (PMOI / MEK Iran) are, even though they presented themselves as presentable people in Europe.  This doesn’t seem to match with the truth as to why would Raisi bother to mention the (PMOI / MEK Iran) unless they were an obvious threat to the current regime’s status within Iran.

Raisi, in his speech about Khomeini, mentioned the 1988 massacre of the political prisoners and that Khomeini himself set an example by taking part in this massacre and encouraged people like Raisi to do the same.

Raisi may have thought the massacre was okay, but not everyone agreed, as on June 1st Morteza Moghtadaei, who also was involved in the1988 massacre, said that one official who lived close by at the time was highly critical of the number of executions. Moghtadaei said that the massacres were ordered by Khomeini, and even if (PMOI / MEK Iran) members pleaded for forgiveness Khomeini believed that if they were released, a wave of bombings would begin.

#Iran: A member of regime’s Supreme Judicial Council during the 1988 #Massacre, Morteza Moghtadai: “many asked why so many [MEK supporters] have been executed…we obeyed the Imam [Khomeini’s] orders…Imam said to execute even those #MEK supporters that are firm in their beliefs” pic.twitter.com/DZAg7MHfoQ

The regime’s state-run television broadcast on June 1st readout Khomeini’s fatwa, which was leveled against thousands of (PMOI / MEK Iran) prisoners. The words called for more measures to be used to stop Iranian students from being lured by “Rajavi’s charisma.”

“… in a situation that regime’s own officials acknowledge that the MEK is attracting youth, following the policy of contraction has only one destination: more public outrage and nationwide uprisings to overthrow the regime.”#Iranhttps://t.co/59MUcYcW1x

The regime faces an uncertain future

Because the current regime has lost its foundation, there is increasing support for the (PMOI / MEK Iran) and in particular amongst the youth. It is now too late for the regime to win back its support so its future is now unknown as the MEK’s hold strengthens.