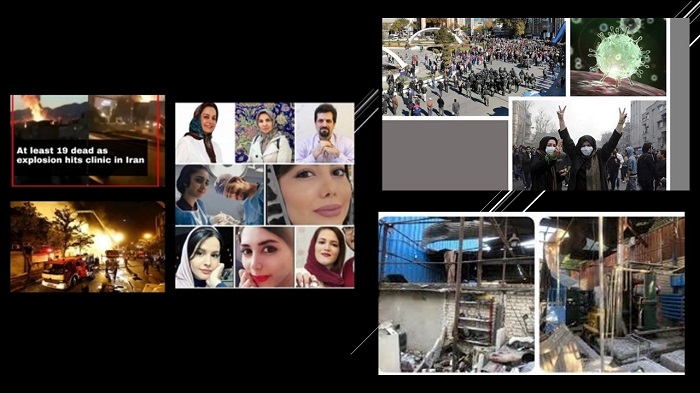 Baghershahr, an industrial town just south of Tehran, has been affected by a huge explosion leaving three people seriously injured and two dead. The explosion happened very early on the morning of Tuesday 7th July.

According to the Iranian regime, the blast was caused by oxygen capsules exploding.

A state-run news agency has reported that the mayor of a nearby town blamed the incident on negligence on the part of employees. The mayor of Kahrizak reportedly said: “Negligence by employees of a workshop involved with filling oxygen capsules led to an explosion at 3:20 am local time Tuesday morning, resulting in two deaths and three injuries.”

Following a series of explosions & fires across #Iran , a massive explosion rocked the industrial town of Baghershahr located south of Tehran in the early morning hours of Tuesday, July 7.#FreeIran2020 https://t.co/ZDjSsW2z8h

It has also been reported that the explosion was so great that a nearby factory was badly damaged.

This is another incident in a series of fires and explosions across the country that point to dilapidated infrastructure and negligence by the Iranian regime.

Only a week ago, there was a major explosion and fire at a medical center in Tehran. In this incident, 14 people were badly injured and 19 people lost their lives. During this incident, regime officials were worried about the unrest that would follow, so sent security forces immediately instead of prioritizing the despatch of emergency services.

My deepest sympathies go out to the families of the victims, particularly the patients,who lost their lives in the catastrophic fire in Tehran’s Sina Clinic. My heartfelt condolences to all the people of #Tehran. Wishing quick recovery of those hurt and injured in the fire. #Iran

The incident at this medical center was also so severe that it damaged neighboring buildings. Emergency workers at the site are warning that there may be further explosions. Regime officials, however, are yet to produce a report determining the cause of the explosion.

There are many concerns about building like these that have recently exploded. The whole infrastructure in Iran has been neglected for decades and incidents like these explosions and fires are becoming more and more frequent. There was a similar incident in Baghershahr just a few years previous to this.

The regime may claim that it does not have the funds to improve the safety of buildings, yet it spends billions of dollars on supporting and arming terrorist groups across the Middle East and beyond. It also spends huge sums on its illicit ballistic missile and nuclear programs.

Once again, it is the people of Iran that are the first victims of the regime’s negligence. Nothing will ever change for as long as the regime is in power. It is one of the most belligerent regimes on the planet and it must be held accountable for its malign behavior.

The people are desperate for regime change because they want to live peacefully, with mutual respect towards their leaders. They crave freedom, human rights, and democracy and this can never be experienced while the mullahs hold power.

The regime’s promise to allocate funds to the people is a “desperate and deceptive move”. The National Council of Resistance of Iran (NCRI) and The (PMOI / MEK Iran) have been instrumental in bringing light to the regime’s crimes including illicit nuclear activities and its terrorist operations around the world. The (PMOI / MEK Iran) knows the regime better than any other organization, including intelligence agencies.

The MEK resistance units inside Iran have been instrumental in relaying the events as they happen.

The NCRI and MEK are urging the international community to speak out about the mullah’s regime’s crimes. The NCRI and MEK point out that the people of Iran are being denied the right to peacefully protest and their freedom of speech is being cut off.

Now is the opportunity for the international community to pick aside. It can stand with the people of Iran who are asking for freedom, democracy, and human rights.

The regime is dealing with crisis after crisis, each one weakening it further.

The current Coronavirus health crisis has spiraled out of control and the regime’s incompetence is being brought to the forefront. Worried about the economic impact of the pandemic, the regime did not take firm measures to control the virus and now the people are paying the price with a rapidly increasing death toll.