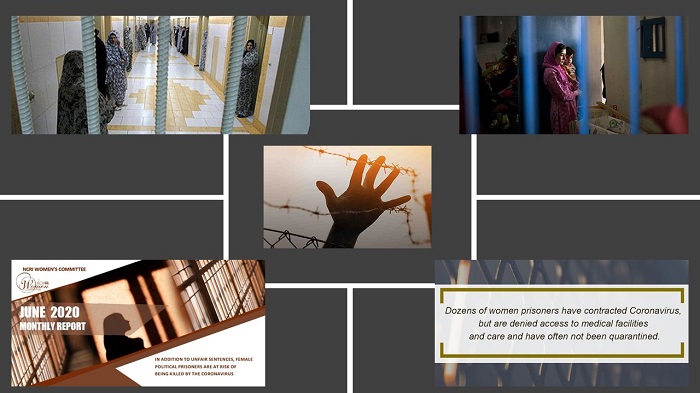 Female prisoners of conscience and political prisoners occupy the women’s ward in the notorious Evin Prison just north of the Iranian capital Tehran.

It is a huge prison with a terrible reputation. Well, the prison conditions in Iran in general fall way below international standards, and the treatment of prisoners of conscience and political prisoners is cruel and brutal.

The Women’s Committee of the National Council of Resistance of Iran (NCRI) has drawn attention to the unsanitary and unsafe conditions prisoners in the women’s ward of Evin Prison deal with. There are two main halls in the ward. Ward 1 has three rooms, holding 30 political prisoners – all political prisoners. The second ward was once reserved for the children and wives of male prisoners, but they were all released earlier this year because of the Coronavirus outbreak.

For now, the second hall in the women’s ward is used as a place for the prisoners to isolate if they are showing symptoms of the COVID-19 virus. This came about because the prisoners insisted.

New female prisoners are automatically put in the second hall before being allowed to join the main hall. However, this 2 week isolation period is completely pointless because all of the prisoners are mixing – for example, to use the phones or to go to the prison store. The prisoners are trying to protect themselves by observing social distancing and being responsible for hygiene. This involves them buying their gloves and masks (at a ridiculously high price) at the prison shop and by responsibly using the very little disinfectant and detergent that is provided to them. Many of the prisoners have resorted to buying their cleaning products, again at ridiculously high prices.

The NCRI Women’s Committee has drawn attention to many other areas of concern in the female part of Evin Prison. Nutrition is a big problem as the quality provided by the prison is substandard. Healthcare is also problematic because the prisoners have to pay for their treatments. Getting medical attention is very difficult, and now even more so because of the Coronavirus outbreak. Delays in medical treatment are very common.

In addition to unfair sentences, female political prisoners are at risk of being killed by the #coronavirus in #Iran

Access to the prison telephone is limited to only 3 times a week, with only 5 numbers per prisoner authorized. Calls are limited to 10 minutes and there is a voice recording heard by the recipient reminding them the call is being made from a prison which is upsetting for children.

Another disturbing aspect of life in prison is that inmates are not separated based on their crimes. This means that a drug addict can be placed into a normal ward and will be left to deal with their withdrawal without treatment.

The Coronavirus outbreak has reduced many usual activities such as visitation, medical visits, and so on, but it has been reported that court summons is actually on the increase. While being transferred to court, female prisoners have noted that guards accompanying them do not follow sanitary protocols. The People’s Mojahedin Organization of Iran (PMOI / MEK Iran) has announced that the Coronavirus death toll is more than 68,100.

Mrs. Maryam Rajavi, President-elect of the (NCRI) has called on the UN Secretary-General, the UN Security Council, and other International organisation that is relevant, to take urgent action in Iran considering that the spread of the Coronavirus is increasing at an alarming rate. She said that international intervention is needed immediately in order to prevent “a humanitarian catastrophe” in prisons.