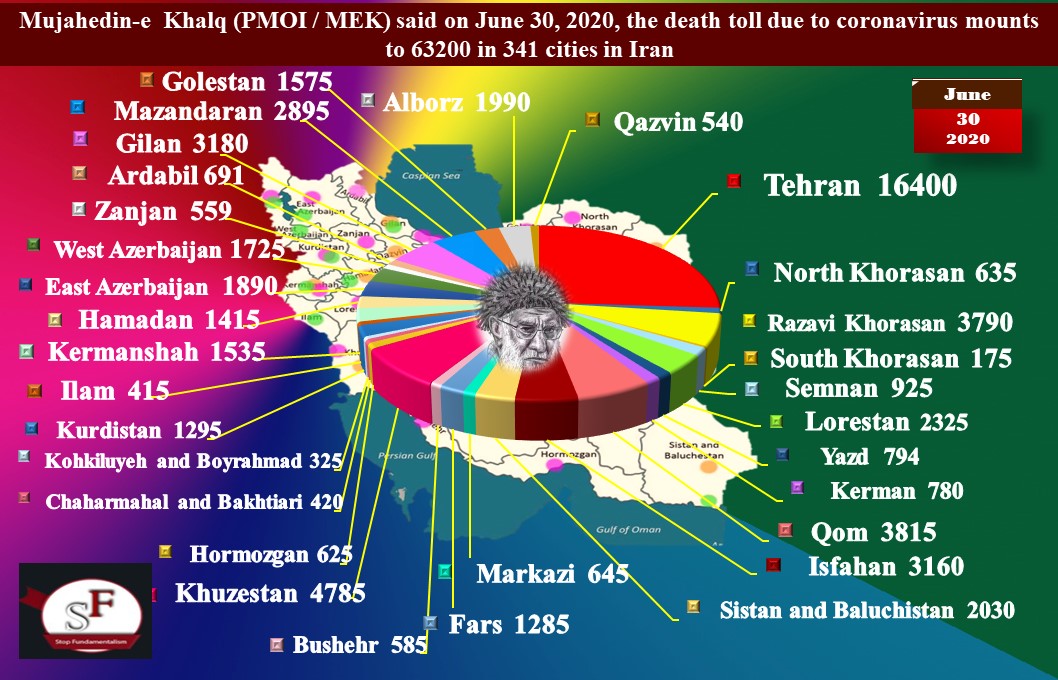 Tens of thousands of people have died in Iran after contracting COVID-19. The health crisis has spiraled out of control and it shows no sign of slowing down.

Since the beginning of the outbreak, the Iranian regime has taken measures too late, or not at all, meaning that more people’s lives are being put in unnecessary danger.

For a long time, numerous regime officials, in particular, President Hassan Rouhani and Supreme Leader Ali Khamenei, tried to downplay the extent of the crisis. On numerous occasions, officials said that the outbreak has been controlled and that Iran is dealing with it exceptionally well, especially compared to several European countries.

Over 63,200 people have died of the novel #coronavirus in 341 cities checkered across all of #Iran’s 31 provinces, according to reports tallied by the Iranian opposition PMOI/MEK as of Tuesday afternoon local time, June 30.https://t.co/QT1q4i189i

However, now Iran’s death toll has largely surpassed that of the worst-affected European countries and the regime has no choice but to admit that the situation in Iran is critical. President Rouhani said a few days ago that the virus has been in the country for six months now and that it may continue for up to another year. He said that as there is no vaccine yet, the people must be prepared “for the long run”.

The head of the Borujerd Health and Treatment Network, Mohammad Kakavand, said a few days ago that the organization believes that a fifth of the population of Borujerd has contracted the virus. He said: “We are on the verge of more than 50 percent of the Iranian people contracting this virus. Of this amount, three to four percent will die, meaning more than one or two million Iranians.”

Officials in cities across the country have spoken about the critical situations in hospitals in their areas, explaining that intensive care units (ICUs) are getting fuller, with some evening having to turn patients away because they have no spare beds. There is also a worrying trend of younger patients suffering badly with the virus.

#Iran: #Coronavirus Death Toll in 341 Cities Exceeds 63,200
The People’s Mojahedin Organization of Iran (PMOI/MEK) announced on Tuesday, June 30, 2020, that the Coronavirus fatalities in 341 cities across Iran, has surged past 63,200. https://t.co/udo7dzfGqT

It was once thought that children and young people were relatively safe – suffering only mildly from the virus – but this is changing in Iran. The Vice-Chancellor for Treatment at the University of Medical Sciences in Isfahan, Behrooz Koleidari, said at the weekend that there were 320 people in the hospital just two weeks ago.

On Saturday morning this has increased to 567; 136 of whom are in the ICU. Furthermore, 74 were on artificial respiration to keep them alive. Thankfully, the People’s Mojahedin Organization of Iran (PMOI / MEK Iran) has been monitoring the outbreak since the very start.

President-elect of the National Council of Resistance of Iran (NCRI), Mrs. Maryam Rajavi, said: “The increasing trend of the coronavirus nationwide as the direct result of the clerical regime’s criminal and inhuman policies. Khamenei and Rouhani are the first among officials responsible for our compatriots losing their lives on such a vast scale.”