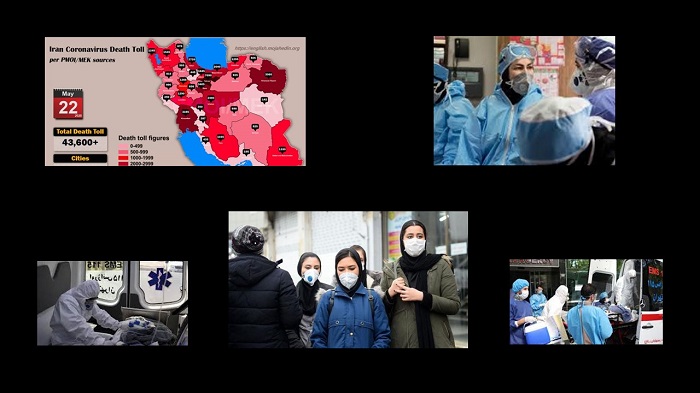 The Coronavirus health crisis continues to decline, with hundreds of new deaths reported every day. The Iranian regime has tried to portray the situation as being under control, but the statistics speak for themselves.

The People’s Mojahedin Organization of Iran (PMOI / MEK Iran), the main opposition to the Iranian regime, has been reporting on the situation regularly. It has been in contact with medical workers, morgues, and front-line workers in every single province to report accurately on the crisis.

Its latest figures indicate that 43,600 people have died and that the virus has spread to 319 cities in all 31 provinces. The regime’s statistics are just a fraction of this – 7,183. This a complete fabrication because in Tehran alone, more than 7,025 people have died after contracting the virus.

More than 43,600 people have died of the novel #coronavirus in 319 cities checkered across all of #Iran‘s 31 provinces, according to the Iranian opposition PMOI/MEK. pic.twitter.com/qg0ikD2gEW

Even the statistics reported by the Ministry of Health are deeply concerning. Compared to just two weeks ago, the number of active cases it is reporting has almost doubled.

Scientific and medical experts around the country are also saying that the situation remains critical in many areas, whereas in others it is declining rapidly. The University of Medical Sciences in Isfahan has said that there has been a 50 percent increase in cases that have not been hospitalized compared to only a week ago. The spokesperson said earlier this week that this should be an “alarm bell” and that Isfahan province is in danger of seeing a new wave of illness.

The head of the Coronavirus Task Force Alireza Zali has warned that the declining curve is now heading in the opposite direction. He said that the cities classified as low-risk are now seeing a spike in cases. He warned that all cities are at risk of seeing the same trend.

According to the latest figures reported by the PMOI / MEK Iran, more than 43,600 people have died after becoming ill will COVID-19 which has spread to 319 cities across the country. https://t.co/m7ju7hBFcP#Iran #MEK #COVIDー19 @USAdarFarsi pic.twitter.com/khfPJfBsWP

The people of Iran have been neglected by the Iranian regime. They have been left extremely vulnerable and have not been helped by the government. The situation is spiraling out of control, but the regime seems to only be concerned about its interests. More and more people are falling into absolute poverty and unemployment is rising even higher since the start of the outbreak.

President-elect of the National Council of Resistance of Iran (NCRI) Mrs. Maryam Rajavi has highlighted that the huge rise in the death toll and the upward trend in infections are a direct result of the regime’s “inhuman policies”.