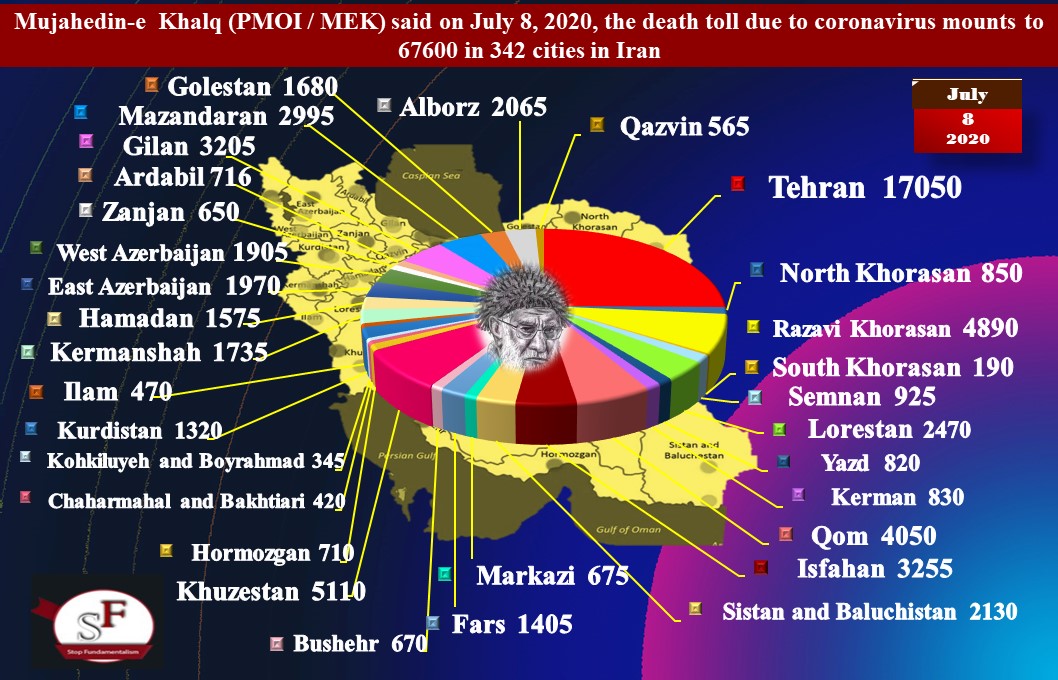 The COVID-19 outbreak has reached all corners of Iran and the latest death toll announced by the People’s Mojahedin Organization of Iran (PMOI / MEK Iran) is 67,600. More than 342 cities across every single Iranian province have been battling against this virus that is deadly to many.

The death toll reported by the Iranian regime is just a fraction of that reported by the (PMOI / MEK Iran), the main opposition to the regime. This figure is 11,731, approximately one-sixth of the opposition’s figure.

Many areas across the country are in “code red” conditions, meaning that the number of new infections, the number of people requiring hospitalization, and the number of beds available in intensive care units (ICUs) are cause for great concern.

At the beginning of the week, Masoud Mardani from the Coronavirus Task Force said that the figures reported by the regime do not include the people that have died from the virus outside a hospital setting.

The situation in densely-populated Tehran is very worrying and the country’s Deputy Minister of Health said that there is a possibility of restrictions being introduced as a result of the recent hike in the number of new cases.

The dean of Iran Medical Sciences University said on Monday that there are major limitations in hospitals across Tehran because of the sheer number of patients. The dean said that the rise in cases over the past few weeks shows that the spread of the virus is escalating.

The head of the sanitation network of Abadan in the province of Ilam said that the situation there is growing increasingly worrying. They said that the number of people being referred to medical centers for treatment has increased fivefold and that there are 8 positive results out of every 11 tests carried out. They also spoke about the dire conditions that doctors, nurses, and medical staff are experiencing, emphasizing that many are quite simply exhausted.

The Council of Medical Associations of Iran, a body that includes 170 medical associations, has called on the government to use whatever financial resources it can to be able to get through this crisis. In a statement, it said: “The medical community of the country (…) recommends to the government and officials of the country to use the country’s strategic financial resources and to forgo other expenditures to counter this disease and, in the face of the coming storm, avoid reneging on their moral duties.”

Whether the regime heeds this advice is another matter, but it is very clear that the situation is continuing to spiral out of control. The regime’s neglect and mismanagement have made the people of Iran extremely vulnerable.

The regime was so concerned about the economic impact of the pandemic that it disregarded the lives of the people. However, instead of helping the economy, the regime is making it worse.

There are calls for international intervention because of the regime’s incompetence. Previous offers of aid from abroad were rejected by the regime.

Mrs. Maryam Rajavi, the President-elect of the National Council of Resistance of Iran (NCRI): The rapid rise in the number of COVID-19 victims is the strategy of mass casualties to forestall the danger of an uprising and their overthrow.

The clerical regime has plundered our nation for 4 decades, squandering the country’s wealth on nuclear and missile projects & on terrorism. It has destroyed all the country’s infrastructures. The regime has left our people defenseless in the face of the pandemic #COVIDー19 #Iran pic.twitter.com/2W6CRNu4nI