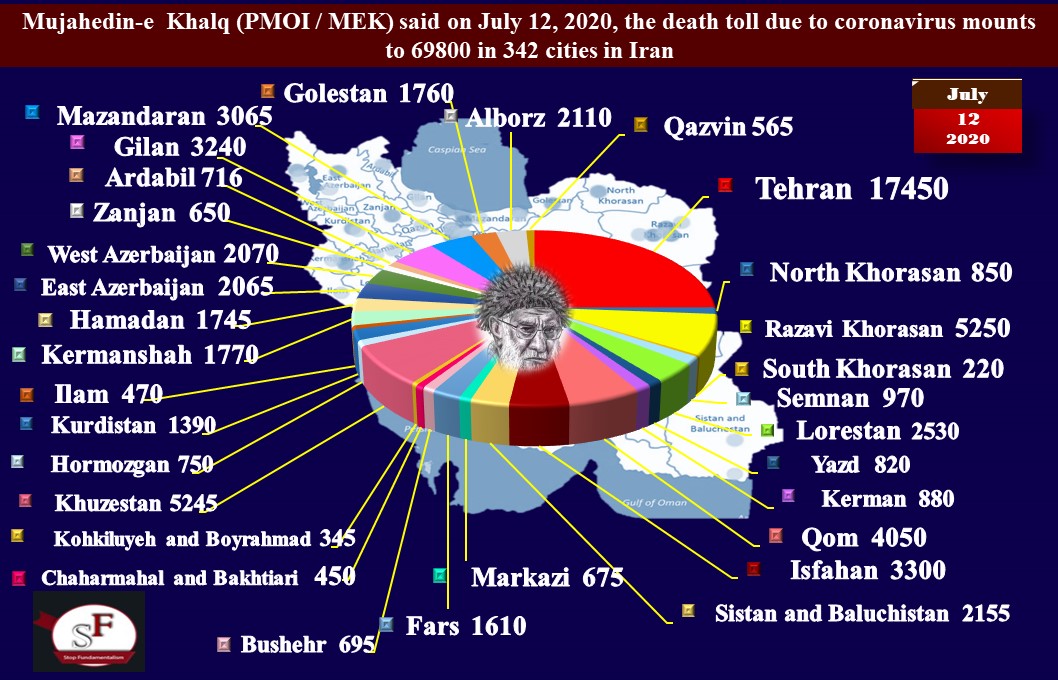 The Coronavirus outbreak in Iran has now claimed the lives of more than 69,800 people across the country. All parts of the country have been affected and many areas are still in a critical and very worrying situation.

The People’s Mojahedin Organization of Iran (PMOI / MEK Iran), the main opposition to the Iranian regime, has been monitoring the situation very closely since the beginning of the outbreak because the corrupt ruling regime cannot be trusted to be honest in such situations. The regime claims that 12,729 people have died – just a sixth of the figure stated by the (PMOI / MEK Iran).

#Iran: State-Run Media Acknowledge How Mullahs’ Regime Is Using #COVID19 to Quell Restive Society
Even the regime’s state-run media are warning one another about an upcoming “flood of revenge.” and uprising. #FreeIran2020 #Iranian https://t.co/esn3s7CpT8

Approximately 17,450 people have died in Tehran, and more than 5,200 in both Razavi Khorasan and Khuzestan.

The Iranian regime has mismanaged the situation since the very beginning and it failed to take the necessary measures to ensure that the virus did not spread rapidly across the country. Lockdowns were put in place far too late, and the “return to normal” came far too soon. The regime’s focus through all of this so far has been the economy.

Supreme Leader Ali Khamenei has said that the resurgence of the virus and a large number of deaths is “truly disturbing”. However, in the same breath, he pointed the finger at the people of Iran, hinting that he is blaming them for the spread of the virus. He said that some people are not wearing masks.

More than 69,800 people have died of the novel #coronavirus in 342 cities checkered across all of Iran’s 31 provinces, according to the Iranian opposition PMOI/MEK.

However, wearing masks alone is not what is going to stop the spread of the virus. The Supreme Leader called on medical workers to do everything they can to “cut off the chain spread of this virus as soon as possible”. What would help is that medical services are funded properly to deal with this health crisis? Even just a small fraction of Khamenei’s wealth could make a huge difference. But instead, the Supreme Leader has left the people to their own devices once again.

Hossein Ghana’ati from the Tehran Coronavirus Task Force has said that the death toll may reach 70,000, explaining that the first wave continues and that the second wave in a few months will claim even more lives. He said that 3 or 4 weeks “of critical time” were wasted. He added: “There has also been undeniably poor coordination and mismanagement at large scale level and regarding some decisions.”

The dean of Alborz province Medical Sciences University also emphasized yesterday that the second wave is going to prove to be “far more catastrophic than the first”. The dean also said that the virus is starting to seriously affect much younger people, indicating that there has been an increase in the number of children dying after contracting the virus.

Speaking about the current outlook, Deputy Health Minister Iraj Harirchi also agreed that a second wave will be more deadly. He also said that there is no hope for a vaccine for at least 12 months.

#PMOI #MEK reported that more than 68,800 people in 342 cities in all 31 provinces in #Iran have died from the novel #coronavirus. #Iranian regime confirmed 221 new deaths and 3,324 severe cases on Friday, setting a new record.https://t.co/lb46wR2uls #FreeIran2020 @USAdarFarsi pic.twitter.com/2xKoNze0Yx

Showing how the situation is getting worse in such a short period, head of the infectious diseases department at Tehran’s Masih Daneshvari hospital Davoud Tabarasi said that in May, 100 people were being admitted to the emergency department – now this has increased to 350.

The governor of Golestan province said that field hospitals are going to have to be erected if the situation keeps moving in the same direction. The governor said that many of the treatment units in the province are already full.

Mrs. Maryam Rajavi, the President-elect of the National Council of Resistance of Iran (NCRI): rapid rise in the number of Covid-19 victims across the country, especially in Tehran, to some of which the regime’s officials reluctantly admit, is due to the criminal policies of Khamenei and Rouhani. Instead of providing temporary relief for workers, they force them to go to work in the busiest and most contaminated areas without minimum preventive and treatment resources.