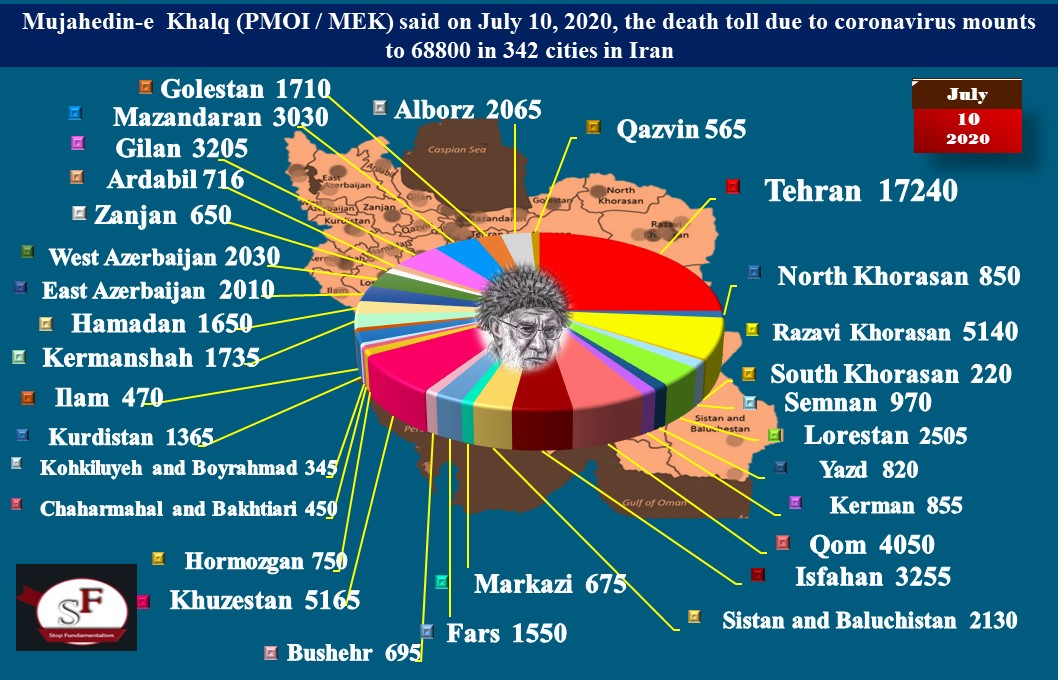 The Coronavirus pandemic in Iran is reaching a very worrying stage. Since the very beginning of the crisis, the Iranian regime failed to take the necessary measures and now the people are paying the price.

Instead of locking down the worst-hit cities and trying to gain control of the outbreak, the regime allowed people to continue their lives as normal. When areas were finally locked down, it came much too late.

The health services across the country, and of course the people, are the ones dealing with the catastrophic consequences.

The country’s Ministry of Health reported on Tuesday that 200 people had died in just 24 hours. There is no doubt that the figures provided by the regime itself are entirely fabricated, but it is very telling nevertheless because the previous day 160 deaths had been announced. From one day to the next, this increase is huge and extremely concerning.

The Minister of Health, Saeed Namaki, said that because of “tough problems” he had not publicly spoken but that he would write to officials. What is was likely talking about was the conflict between him and other Ministry of Health officials and President Hassan Rouhani. Namaki had advised against the re-opening of public places. He said that he “begged” for the decision to re-open public places not to be made. Ultimately the decision was made and he said it has brought “heavy consequences and death of our people”. President Hassan Rouhani has not yet spoken about this.

More than 68,800 people have died of the novel #coronavirus in 342 cities checkered across all of Iran’s 31 provinces, according to the Iranian opposition PMOI/MEK.

The infighting and the divisions in the regime are more evident than ever. There is no cohesion or unity within the government – something that is needed in such a time of crisis.

Medical workers across the country are fuming with the country’s leadership because they have been overwhelmed with the number of patients requiring treatment. They have been left vulnerable and have been neglected by the government.

Many hospitals and medical centers across the country are full and unable to accept any more patients.

The head of the Infectious Diseases Department at Masih Daneshvari Hospital said that there are no free beds there. They said: “In the open air, shade is provided so that patients can be transferred to the ICU after the beds are emptied. Naturally, when the number of patients increases, it cannot be controlled.”

#Iran: #Coronavirus Death Toll in 342 Cities Exceeds 68,800
According to doctors’ reports, at least 250 Coronavirus patients have died in Sina, Be’ sat, Beheshti, and Social Security hospitals in Hamedan Province from June 21. https://t.co/ywX55ubG1M

A little while ago, the regime had been discussing herd immunity. It was a strategy that the Iranian President and Supreme Leader Ali Khamenei were keen to move forward with, despite strong objections and reservations from many, in particular medical and scientific experts. The consequence of this strategy, as we are seeing in Iran, is the deaths of huge numbers of people. It is an inhuman strategy that should have been dismissed a long time ago.

It is believed that more than 68,800 people in the country have died after contracting the virus. We have access to these figures (that are around six times higher than the regime’s engineered figures) because the People’s Mojahedin Organization of Iran (PMOI / MEK Iran), the main opposition to the Iranian regime, has been monitoring the outbreak since the very start.

Mrs. Maryam Rajavi, the President-elect of the National Council of Resistance of Iran (NCRI), said the rapid rise in the number of Coronavirus victims across the country, especially in Tehran, to some of which the regime’s officials reluctantly admit, is due to the criminal policies of Khamenei and Rouhani.