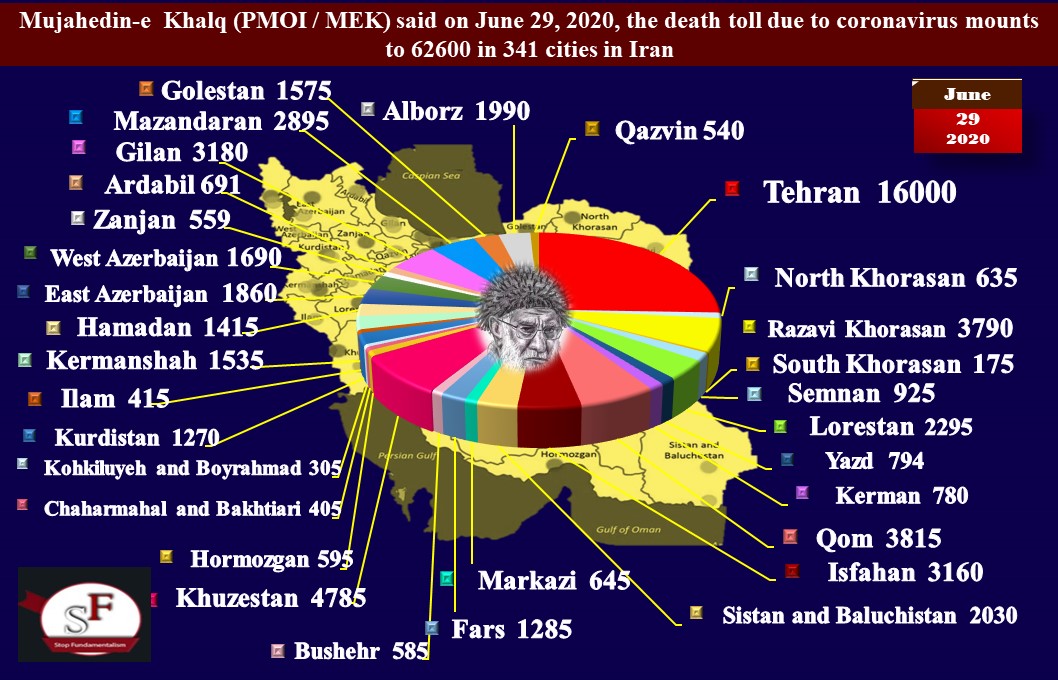 The People’s Mojahedin Organization of Iran (PMOI / MEK Iran) has reported that more than 62,600 people have died after contracting COVID-19 in Iran. Every single province has been affected and 340 cities across the country.

More than 62,600 people have died of the novel #coronavirus in 341 cities checkered across all of #Iran‘s 31 provinces, according to the Iranian opposition PMOI/MEK. pic.twitter.com/xeNxqZsdYz

There are no indications that the outbreak is coming to a close in Iran. Scientific and medical experts are warning that it is getting worse at a very worrying rate. In Tehran, hospitals are concerned because they are once against becoming saturated with patients needing medical treatment. There has been no choice but to send people back home to isolate.

Intensive care units (ICUs) across the country are filling up and people are unfortunately dying because there have not been enough free beds. Doctors and medical staff in the province of Tehran have said that there will soon be more than 100,000 people seeking treatment if action is not taken immediately.

Until very recently, the Supreme Leader Ali Khamenei and President Hassan Rouhani have been trying to convince the population that the situation is under control and that the virus is disappearing from the country. However, these statements can no longer be believed because the reality is very clear for all to see. Khamenei is now saying that there is a new rise in cases and that the situation is being taken “too lightly” by many.

More than 62,600 people have died of the novel #coronavirus in 341 cities checkered across all of #Iran‘s 31 provinces, according to the Iranian opposition PMOI/MEK.

The country’s Ministry of Health has also had to admit that the number of cases is on the rise. Deputy health minister Iraj Harirchi said that every 33 seconds someone in Iran contracts the virus and that every 13 minutes someone dies from it.

This news is very concerning considering that the country has been fighting the virus since at least February. Iran has been in a good position where it had the opportunity to see how other countries are dealing with it, deducing what measures work and what mistakes have been made. Yet, the regime wasted this opportunity and instead tried to pretend that it wasn’t happening.

#Maryam_Rajavi #NCRI Du to the inhuman policies regime the coronavirus has spread across 341 cities, claiming victims all over #Iran. 62,600 people in 341 cities in all 31 provinces in Iran have died according to a Monday statement from the #PMOI #MEK https://t.co/0EUTvDeq7l

Since the beginning of the outbreak, the regime has failed to prioritize the people. It has neglected to protect them and the measures it has taken have just made the people more vulnerable.

There are calls for urgent action to be taken by the international community. The regime has proved itself to be entirely incapable of managing the outbreak and the defenseless people of Iran cannot be ignored. Recent reports indicate that there is an increasing number of young people and children contracting the virus. The regime cannot be allowed to continue letting people die.

Mrs. Maryam Rajavi is the President-elect of the National Council of Resistance of Iran’s (NCRI), She said mullahs regime instead of helping the people of Iran, and shutting down non-essential businesses temporarily, the mullahs’ regime sent workers to work, and yet they claim that the people observed less than 9 percent of all the hygiene protocols.