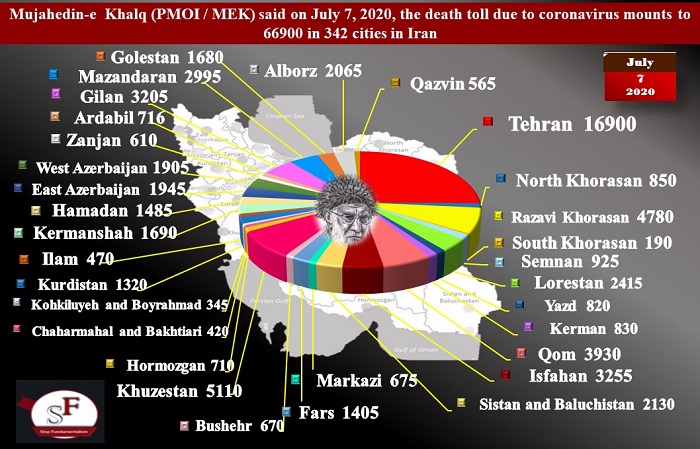 Iraj Harirchi, the regime’s Deputy Health Minister, admitted that 18 million people are infected with Coronavirus. He said, “In some provinces that the Coronavirus epidemic started sooner, over 50% of the population is infected with the virus.

Explosion in south of Tehran leaves five dead and woundedhttps://t.co/lzswxcGEi2

Therefore, the figure of 18 million for those infected with the virus is not odd.” Speaking to the state-run media, Fartaknews, he added, “It is very likely that the death toll could increase to about 200 daily.

Referring to the epidemiological goals of serology tests, Masoud Mardani, member of the NCCT, told ISNA, “This test was performed randomly, and we found that 18 million Iranians, or about 20 percent of the country’s population, have been infected with the disease so far.”

The state-run daily, Hamshahri wrote, “A study of the statistics of the Health Ministry shows that in the last ten days, on average, 106 people have been infected in Iran and approximately six people lost their lives to this virus every hour.”

No white state in the country

The president of the University of Medical Sciences in Hormozgan was quoted by ISNA as saying, “Hormozgan is now at the peak of the disease… Further spread of the disease is expected in villages this week.”

Morteza Khatami, a member of the regime’s Parliament’s Health and Treatment Commission, told the Tasnim news agency, “Removing restrictions on the pretext of economic issues raises the concern that health will be sacrificed for economic reasons.”

In South Khorasan, the president of the Medical Sciences University in Birjand told IRNA, “Currently, we don’t have any city with less danger or white (virus-free) in the Province.”

In Golestan, the president of the University of Medical Sciences told Mehr news agency, “A catastrophe worse than March is expected … A peak as high as the one in March is not out of the realm of possibility. We expect to face problems in providing services due to the shortage of oxygen and beds, and we need to make a quick decision in this regard.”

Harirchi was also quoted by the state TV, saying that 15,000 of the countries’ medical staff had contracted the virus.

According to the Tasnim website, the vice-president of the University of Medical Sciences in Zanjan said, “The number of Coronavirus patients is rising… We face a shortage of equipment, and the current facilities are not sufficient for the incoming patients … One hundred members of the medical staff have been infected with COVID-19… The Province is short of personnel in the health and treatment sectors and hospital facilities.”

While local authorities in different provinces report a severe shortage of medical services and the health care system’s disintegration, the mullahs’ president Hassan Rouhani brazenly said, “Our health and hygiene system was so active that we barely needed to ask our armed forces to help out. During this period, our health and hygiene system works and, at the same time, increases its capacity in hospitals and hospitalization.”

Mrs. Maryam Rajavi is the President-elect of the National Council of Resistance of Iran’s (NCRI), hailed the protesting nurses who were attacked with batons and Tasers in Mashhad, as well as the general practitioners, nurses, and all medical staff who are striving their best to save the lives of patients.

The clerical regime has plundered our nation for 4 decades, squandering the country’s wealth on nuclear and missile projects & on terrorism. It has destroyed all the country’s infrastructures. The regime has left our people defenseless in the face of the pandemic #COVIDー19 #Iran pic.twitter.com/2W6CRNu4nI

She added: By plundering and squandering the public wealth and resources on nuclear and missile projects, along with terrorism and warmongering, the clerical regime has destroyed the country’s infrastructure. Despite the most skilled and selfless doctors and nurses, it has left our people defenseless in the face of the disease. The only way to end this situation is to overthrow the clerical regime and establish democracy and popular sovereignty.