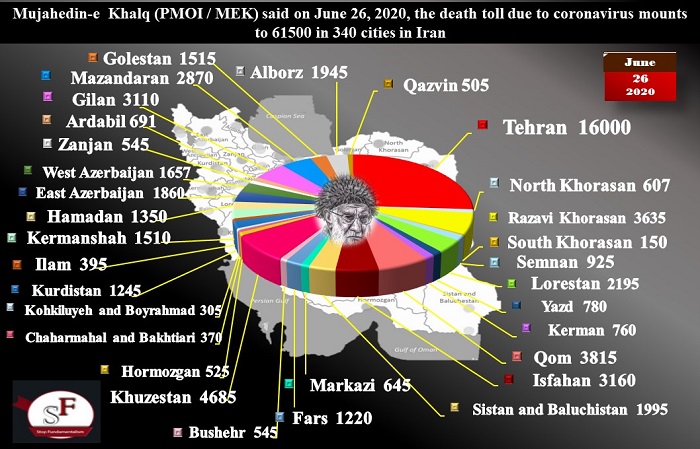 The novel coronavirus in 340 cities across Iran’s 31 provinces, according to reports by the People’s Mojahedin Organization of Iran (PMOI / MEK Iran) has now caused the death of more than 61,500 people throughout Iran.

The mullah’s regime’s official figure of death stands at 10,239, less than a sixth of the actual figure.

The spokesperson for the Health Ministry said 134 people had died of Coronavirus in the past 24 hours. Alireza Raeisi, regime’s Deputy Health Minister, told the state-controlled website, Alef, “In some provinces, such as Qom and Gilan, about 40 percent of the population suffer from Coronavirus.

#Maryam_Rajavi is the President-elect of #NCRI said due to the inhuman policies of Khamenei and Rouhani, the #coronavirus has spread like wildfire, claiming victims all over #Iran. #PMOI #MEK reported death toll 61500.https://t.co/xrD7lRb4hI
@USAdarFarsi #MullahCovidHolocaust

In Tehran, the infection is about 15%… As the Ministry of Health, it was in our interest that the reopening did not happen, but some people cannot make ends meet if they do not work daily. … We are not past the first peek of the outbreak yet. Sometimes a few provinces get caught up and then other provinces. The virus continues to spread across the country.”

In Tehran, Zali, head of the National Coronavirus Combat Taskforce (NCCT), the IRGC news agency, Fars, yesterday, “14 to 20 percent of Tehran’s population have been infected with Coronavirus.

According to Javan daily, the IRGC affiliated website, the president of Bushehr University of Medical Sciences said today, “The number of infected people has exceeded 5,000. In other words, in two weeks, the number of patients in Bushehr Province has more than doubled.

Children are among victims

In Golestan, according to the state television and radio news agency, the president of the University of Medical Sciences reporting of 460 patients hospitalized in the province’s health centers, said, “We may face a shortage of beds in Gonbad Kavus Hospital in the next two or three days. Children are also infected with the virus.”

In Kermanshah, the vice-president of the Medical Sciences University was quoted by IRGC’s mouthpiece Javan, yesterday, as saying, “Every day, our beds are increasing as are the number of patients and the dead…. If the situation continues as such, we will certainly face an extremely difficult situation.”

In East Azerbaijan, the president of the Medical Sciences University in Tabriz told ISNA on June 24, “The number of new Coronavirus patients in the province has risen from 300 to 450 daily.”

Despite the red state, Friday prayers to go-ahead

According to IRNA news agency, yesterday, “10 people died of Coronavirus last night in Gonbad alone”, despite “the gravity of the situation in Golestan, and the spread of the virus in many regions, turning the situation to read, the Friday prayers are scheduled to be held this week in 13 cities in the province.”

In Fars, a member of Shiraz City Council told the Tasnim news agency on June 24, ” Now, centers for treatment and recuperation are again facing the high number of outpatients, hospitalizations, and the rising number of deaths because of Coronavirus.”

Mrs. Maryam Rajavi is the President-elect of the National Council of Resistance of Iran’s (NCRI): The shocking number of victims across Iran, especially in Tehran is a direct result of Khamenei’s and Rouhani’s criminal policies that in clear conflict with the relevant ministries and regime experts have sent workers to face the Covid-19 epidemic instead of coming to people’s aide and locking down non-essential activities. Instead, they brazenly claim that the public follows less than 9% of health protocols.