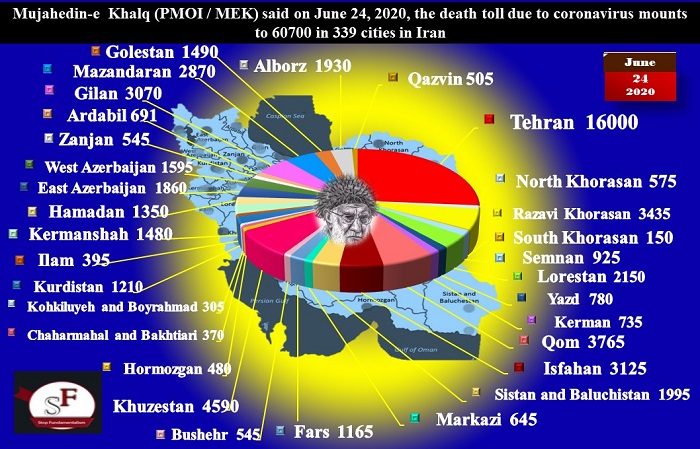 The People’s Mojahedin Organization of Iran (PMOI / MEK Iran) announced on June 24, 2020, that the Coronavirus death toll in 339 cities across Iran had exceeded 60,700.

The spokesperson for the Health Ministry of the Iranian regime said that 121 people had died in one day, the highest in nearly three months. Following the increase in the number of infected patients, hospitals, and health centers in most provinces and cities are facing crises and serious deficiencies.

More than 60,700 people have died of the novel #coronavirus in 339 cities checkered across all of #Iran‘s 31 provinces, according to the Iranian opposition PMOI/MEK. pic.twitter.com/ipXHAW1cDj

In Tehran, according to doctors, the number of patients admitted to Baqiyatallah Hospital last month was three times that of the preceding month. Two hundred ninety patients infected to Coronavirus or suspected of being infected visit the Hospital daily. One hundred fifty patients are in critical condition. In recent weeks, three other hospital wards have been assigned to COVID19 patients due to a large number of infected. More than 200 hospital staff have contracted Coronavirus, and at least three, including a nurse who died on June 10, have lost their lives.

In Khuzestan province, according to professors at Jundishapur University of Medical Sciences in Ahvaz, the death toll among those testing positive for Coronavirus at the region under the control of the university is 30 per day, but the number of people suspected of being infected with Coronavirus and dying untested or dying at home is much higher, although not counted at all.

In Kurdistan province, the president of the Medical Sciences University was quoted by Mehr news agency as saying June 22, “The trend of Coronavirus infection continues to rise. Just in the past 24 hours, 255 new patients have been identified across the Province.”

In Markazi Province, the president of the Medical Sciences University reported a three-digit figure for those infected with the virus in one day, according to Hamshari daily June 23.

The extreme exhaustion of care-givers

In Lorestan province, the president of the Borujerdi Hospital told IRNA June 23, “40 medical personnel have been infected with the virus. The Hospital is facing a shortage of equipment, personnel, funds, and medicine. Extreme exhaustion of our colleagues and the shortage of service, logistics, and law enforcement personnel have caused difficulties in providing services to the patients.”

In Golestan province, the vice president of the University of Medical Sciences told Hamshahri daily June 23, “The admission rate for Coronavirus disease patients is twice as many that discharge.”

The president of Jahrom University of Medical Sciences said, “We are facing a significant increase in the number of patients. About 50% of the daily samples have been proved positive, but before that, on average, 13% were positive,” reported the Tasnim news agency June 22

In Hormozgan Province, a deputy of regime Parliament from Bandar Abbas was quoted by ISNA news agency, June 23 as saying, “We suggest a two-week closure of offices and a full quarantine. One of the difficulties in the Province, which we have faced before, is the shortage of resources and medical equipment.”

In Ilam province, the Governor told Fartak news June 22, “Today, we have an unprecedented trend of the diseases in the Province. We held an emergency meeting, and I raise the alarm right here.”

Instead of helping the people of #Iran, and shutting down non-essential businesses temporarily, the mullahs sent workers and toilers to work, and yet they claim that the people observed less than 9 percent of all the hygiene protocols. #COVID19

Mrs. Maryam Rajavi is the President-elect of the National Council of Resistance of Iran’s (NCRI): How could millions of people go to work in Tehran, one of the world’s most populated cities, and at the same time observe social distancing?