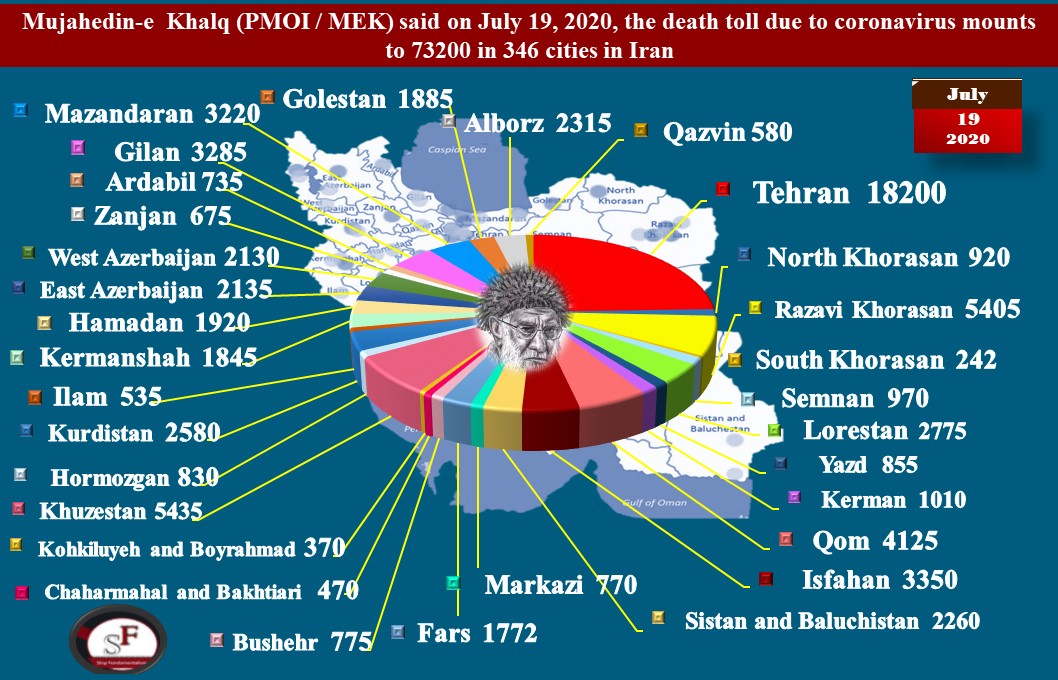 Hassan Rouhani admitted, July 18: “So far, 25 million Iranians have been infected with the Coronavirus, and we must expect that 30 to 35 million people will be infected with the virus … The number of hospitalizations in the future will be twice the number we had in the past 150 days.”

He brazenly blamed the people again, saying, “The second wave of the outbreak is because our wedding ceremonies follow their form and length in time. It is the same in mourning ceremonies and parties. “

Health Ministry officials Jahanpour and Mohraz state that reopening and lifting restrictions were the cause.

While Rouhani blames the people for the new Coronavirus outbreak, regime Health Ministry officials Jahanpour and Mohraz state that reopening and lifting restrictions were the cause. Minoo Mohraz, a member of the NCCT, told Vatane-e Emrouz, today, “The number of patients with the disease in Tehran has increased dramatically.

The second wave is much more dangerous and more deadly than the previous months … Mohraz said that the critically ill Coronavirus patients in hospitals die very soon,” adding, “Tehran and city hospitals are now full of critically ill patients … after reopening and elimination Restrictions The spread of this disease has become more widespread in the country,” reported Vatan-e-Emrouz, July 17, 2020.

Meanwhile, Kianoush Jahanpour, the public relations director of the regime’s Health Ministry, told the state-run media, Iran Online, today, “With the reopening of shops and businesses, the rise in the death toll, was predictable. At that time, the Health Ministry repeatedly warned that the situation was not normal at all. We announced that there is no safe place or virus-free area anywhere in the country … and (ignoring) this was a definite result, and we believe that nothing unexpected has occurred.”

15  to 20% of Kermanis are infected with Coronavirus

In Kerman, the vice-president of Kerman University of Medical Sciences told ISNA, yesterday, “Between 15 and 20% of Kermanis are infected with Coronavirus. The number of those hospitalized and dead has increased, and now almost the entire Province is in a red situation…We cannot impose many restrictions now because the NCCT in Tehran has tied our hands.”

In Yazd, the vice president of Sadoughi University of Medical Sciences announced a more than three-fold increase in the number of Coronavirus patients over the past 40 days, saying, “40 days ago the number of hospitalized patients reached 70 and today, Friday, it reached 235,” according to ISNA on July 17.

Commemorating innocent victims of the #Coronavirus in #Iran pic.twitter.com/E1rwwrPb2C

Mrs. Maryam Rajavi, the President-elect of the National Council of Resistance of Iran (NCRI), said the rapid rise in the number of COVID-19 victims across Iran, especially in Tehran, to some of which the regime’s officials reluctantly admit, is due to the criminal policies of Ali Khamenei and Hassan Rouhani.

Instead of providing temporary relief for workers, they force them to go to work in the busiest and most contaminated areas without minimum preventive and treatment resources. At the same time, they blame the people for not abiding by health protocols and for the spread of the virus. This is the strategy of mass casualties to forestall the danger of an uprising and their overthrow.