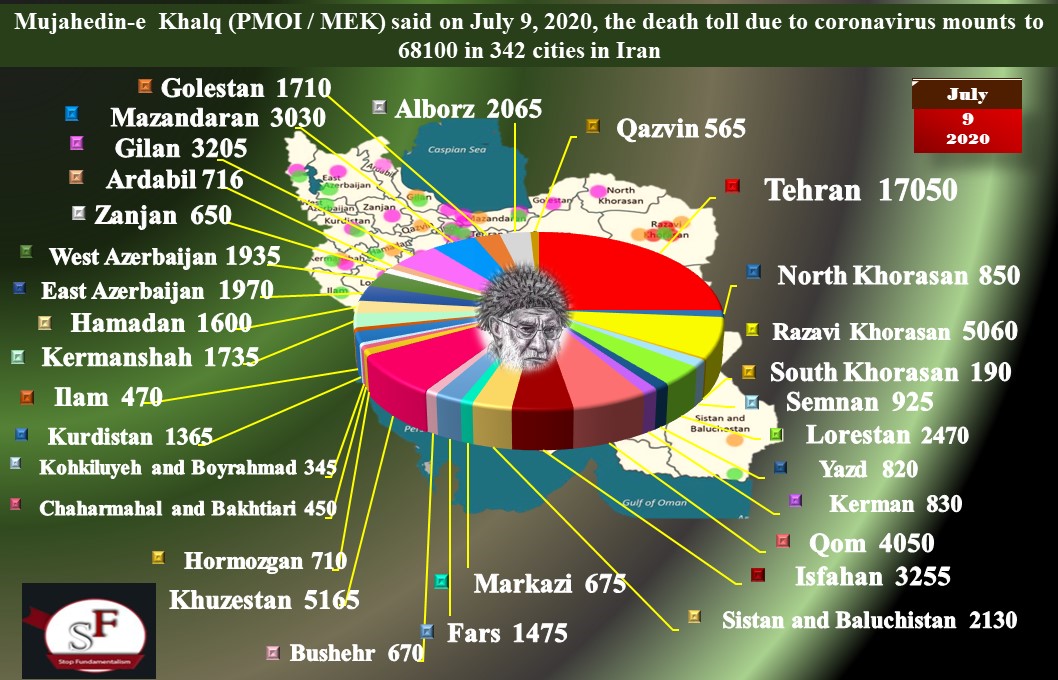 According to The People’s Mojahedin Organization of Iran (PMOI / MEK Iran) on Thursday, July 9, 2020, the Coronavirus death toll in Iran is more than 68,100.

Lifting the restrictions has left us with 200 people dying in the past 24 hours. If comprehensive measures are not taken… the situation will certainly get worse… The Coronavirus vaccine will not be available sooner than 12 months.”

Mohammad-Ali Mohseni, a member of Parliament, and a member of the Health and Medical Commission told state-run website Rouydad 24, on July 5, “In some days, we had 300 people dying to Coronavirus, The Health Ministry’s figures do not include those who die at home or on the way to the hospital.” He acknowledged, “The fear of empty [dinner] tables due to the lockdown of businesses forced people to go back to the streets. It had nothing to do with being hardheaded. Households feared a future when the head of the family could not make ends meet.”

After the new Coronavirus outbreak in Iran, the regime’s President Hassan Rohani and the regime’s Supreme Leader Ali Khamenei blamed the US and said that if containment measures are not being imposed in the country, it is because of US sanctions. They argued that it is impossible for Tehran to sell the oil and to access funds frozen in various countries to pay the salaries of employees and wage earners in the country.

on April 11, with Khamenei’s approval, Rohani decided to send people to work and asked the population to resume economic activities. This decision provoked an outcry of protests in Iran, as experts warned that the resumption of normal economic activity will bring an even deadlier wave of coronavirus in Iran. Some have predicted a bleak future with 60 million people infected and up to two million dead. Ministry of Health officials has announced that so far, some 20% of the population has contracted COVID 19.

Besides, more and more voices are being raised in Iran, especially within the government itself, to underline a reality that has rarely been raised in Iran: hundreds of billions of dollars of the nation’s wealth are kept in the banks and foundations controlled by the Supreme Guide, who refuses to disburse it to come to the aid of the population at the risk of endangering the lives of hundreds of thousands of people.

Yahya Aleh-Eshagh, former director of the Tehran Chamber of Commerce, told the Khabar Online website on 10 April: “According to government officials, we have $4 trillion in foreign currency that is available to the government but remains frozen. Besides, around 50% of bank assets are frozen and are not being used. To be able to solve the country’s problems, we need to turn the frozen assets into current assets.

Massih Mohajeri, an authority of the regime for 40 years and editor-in-chief of the very official daily Jomhouri Islami, acknowledged that “the problems of the impoverished sectors can be completely and quickly solved if the properties and vast financial resources of the foundations of the headquarters of the Order of Imam Khomeini, the Disinherited and Astan-e Qods Razavi are used to help them. These properties and assets belong to the people, and it is precisely in such situations that they should be used to solve the people’s problems. “On April 13, the official daily Arman wrote: “Irrespective of the assets it has confiscated, the Foundation of the Disinherited alone owns 12 holding companies and a total of 175 financial companies. »

Maryam Rajavi, the leader of the Iranian Resistance (NCRI), for her part, stressed that the rapid increase in the number of coronavirus victims throughout the country, especially in Tehran, is due to the criminal policies of Khamenei and Rohani. “Instead of providing temporary help to workers, they are forcing them to go to work in the most crowded and contaminated areas,” she said. With mass casualties, the regime seeks to prevent the danger of a popular uprising in Iran that could end with the overthrow of the dictatorship.

Mullahs regime officials spoke of the role and position of the Iranian resistance and the MEK Iran in resisting the regime and their four-decades-old resistance that despite execution, torture and imprisonment of more than 120,000 martyrs, has become the nightmare of the ruling mullahs, and wrote: