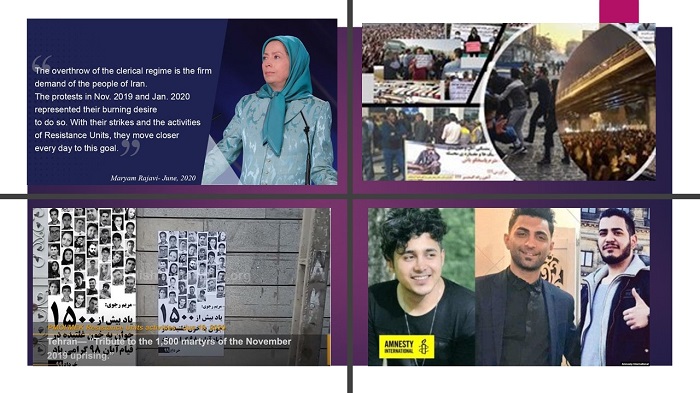 Young Resistance units in Iran, as well as supporters of the People’s Mojahedin Organization of Iran (PMOI / MEK Iran), have been taking to the streets during the past few weeks to voice their opposition to the mullahs’ regime.

So there is nothing better as far as the mullahs’ regime is concerned than frightening people into taking part in widespread protests and uprisings.

It is doing this by creating an atmosphere of fear by conducting widespread executions, issuing long-term prison sentences, and arresting young people to intimidate them. These all breach the Iranian people’s right to freedom of expression which is all but non-existent in Iran today.

The Iranian Resistance is requesting the United Nations Secretary-General, the UN Human Rights Council and the High Commissioner for Human Rights, as well as relevant rapporteurs and other human rights organizations, to save political prisoners lives in Iran.

The regime’s leaders, including Ali Khamenei, his president Hassan Rouhani and other officials of the mullah’s regime, constantly express alarm over the growing role of the #PMOI #MEK and its resilient Resistance Units across #Iranhttps://t.co/o0tskv2SlP @USAdarFarsi #Iranian

This is repeating the call made by Mrs. Maryam Rajavi, the President-elect of the National Council of Resistance of Iran (NCRI), for the forming of an international fact-finding delegation which should come to visit Iranian prisons and meet with these prisoners who have been imprisoned for the words they have uttered against the regime.

The overthrow of the clerical regime is the firm demand of the people of #Iran. The protests in Nov. 2019 & Jan. 2020 represented their burning desire to do so. With their strikes and the activities of Resistance Units, they move closer every day to this goal. #FreeIran2020 pic.twitter.com/EL782MF3n0