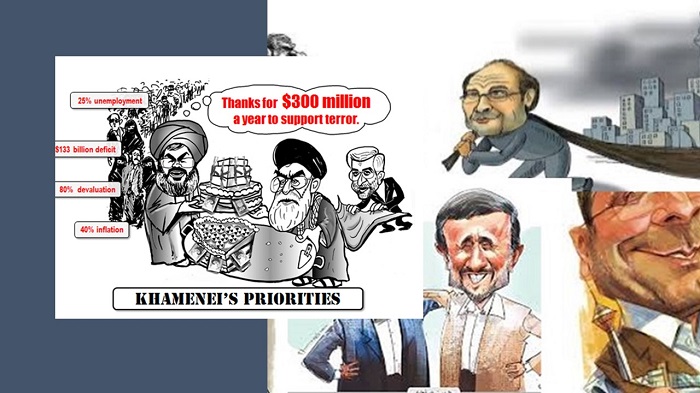 Iranian Supreme Leader Ali Khamenei warned parliamentarians on Sunday about the social crisis on the horizon that threatens the stability of the regime and said that regime infighting would make an uprising more likely.

Khamenei said: “The atmosphere of conflict at the top of the establishment is harmful and upsetting for the public opinion… Despite [a] differences of opinions, we must stand hand in hand against the enemy and speak common words.”

In a video-conference on Sunday, July 12, the Iranian regime’s Supreme Leader Ali Khamenei warned the new hand-picked members of the Majlis about the looming the social crisis the regime is facing.#Iran#IranProtestshttps://t.co/sU0EPgVqNV

He wants to unite the rival factions, who are already all sworn to his allegiance and are not really opposed politically, in order to protect the regime from their joint enemy; the people of Iran and their resistance forces led by the National Council of Resistance of Iran (NCRI) and the People’s Mojahedin Organization of Iran (PMOI / MEK Iran).

Khamenei then went on to praise the parliament for its “sensitivity” to “the issues of the revolution” and call it “one of the strongest and most revolutionary parliaments” since the 1979 revolution, which makes sense because in February he rigged the election to institute his cronies into government, including a former commander of the Revolutionary Guards Mohammad Bagher Qalibaf.

He further acknowledged that this is a crucial time for President Hassan Rouhani, which is in the final year of its term, and admitted that the regime has not handled the coronavirus pandemic well. He tried to claim that there had been “initial success”, which isn’t true. In fact, the regime tried to downplay the crisis with fake statistics that were then shown up by the People’s Mojahedin Organization of Iran (PMOI / MEK Iran), which reported the truth.

The regime then refused to shut down businesses or quarantine cities, with Rouhani explicitly saying that he would prefer 3 million coronavirus deaths in the country than a nationwide protest aimed at regime change, like those in January and November. However, Khamenei preferred to blame the public by saying that they were not wearing masks.

Of course, Khamenei has no solution to offer – not even the billions of dollars in his foundations – and recommends that people pray as if that were ever enough. All of his money was stolen from the Iranian people and the least he could do is return it now in the form of payments to stay home and increased medical staff, but he is not going to look at that at all.

Meanwhile, overthrow is being repeatedly speculated about by Iranian media and personalities. One regime expert told Sharq Daily on Sunday that if the pressure on society continues then they will have “riots” again and that the regime is in a “stalemate situation” because whatever they do, they will not like the consequences.