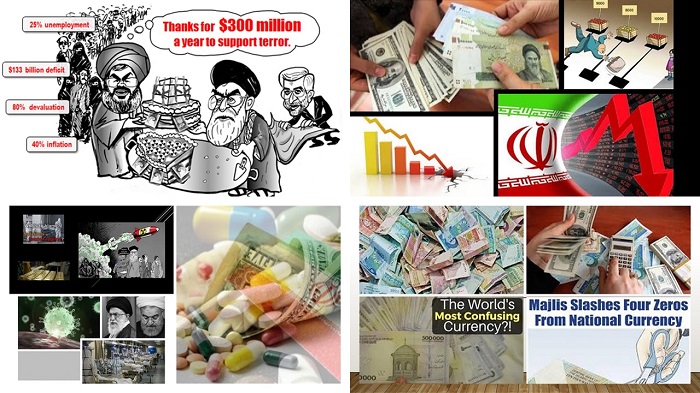 The state of affairs in Iran has been very bleak for a very long time. Decades of mismanagement and widespread corruption at all levels of leadership have left the country in tatters.

Because of the regime’s belligerence, the United States administration brought a maximum pressure policy into place. One of the main goals is to put an end to the regime’s financing of terrorist activities and groups and to stop it further developing its nuclear and ballistic missile programs.

The maximum pressure policy is affecting. Regime officials have previously boasted that the policy will not hurt Iran in the way the United States wants, but this is starting to change. Earlier this week, the head of Iran’s Central Bank and the head of government’s program and budget organization spoke about the situation during a session in parliament.

Iran’s economic situation and injustice will lead to a revolution, regime insider says

The two heads said that the regime is finding itself in a difficult position because of international isolation and pressure from abroad.

President of the Central Bank Abdul Nasser Hemmati described the year 2019 as one of the most difficult because of the major disruption to the country’s exports and the banking system. He said that even allies to Iran are unable to assist the country because of the pressure that the United States is putting on them.

Head of government’s program and budget organization, Mohammad Baqer Nobakht, also spoke about the difficult situation that the regime is finding itself in, explaining that it is very challenging for the country to run efficiently and effectively, even if the taxes and oil exports are not taken into account. He said that stagnation is a big problem and questioned how the government is supposed to pay the wages of government employees. Nobakht said that the country is now dealing with the effects of sanctions and international pressure.

Mullahs tried to use the death toll as a tool to break the US sanctions and the maximum pressure campaign #MEK #Iran regime and its lobbies have extensively argued that the sanctions have caused the pharmaceutical crisis in Iranhttps://t.co/WA45BYZEUA #coronavirus @USAdarFarsi pic.twitter.com/FuYuSE1VbT

Other officials and financial experts believe that the economic situation is going to continue to worsen over the next few months. Even the most optimistic of predictions indicate that industries are going to suffer. Even the insurance industry is going to drop, possibly by almost a fifth.

Oil exports are a major source of income for the Iranian regime and the sanctions imposed by the United States have put immense pressure on the regime. It has tried to compensate with other exports, but it has not been successful. Statistics from the customs agency in Iran state that in the first two months of the year, Iran’s non-oil exports fell by a staggering 49 percent. This period last year brought the regime $8.4 billion – this year it was just $4.3 billion. Imports are also falling drastically.

There is no doubt that the pressure being put on the Iranian regime is working. The US administration is still keeping to its word on maintaining pressure and last week US Secretary of State Mike Pompeo announced that the Iranian government’s nuclear waiver is going to be terminated because Iran’s behavior continues to be unacceptable.

January 11 – Tehran, #Iran
Sharif University
Crowd chanting: “Down with the mullahs’ regime principle!”
The Iranian people are determined to uproot the regime ruling Iran in its entirety.#IranProtestspic.twitter.com/qmgFqOuWZb

With the health crisis, the economic crisis, and the unemployment crisis worsening with every day that passes, the regime is digging its own grave. The Iranian regime is right to fear another uprising. It is just a matter of time. The people have the support of the  (PMO / MEK Iran) – the main opposition to the Iranian regime, to bring an end to all these crises.