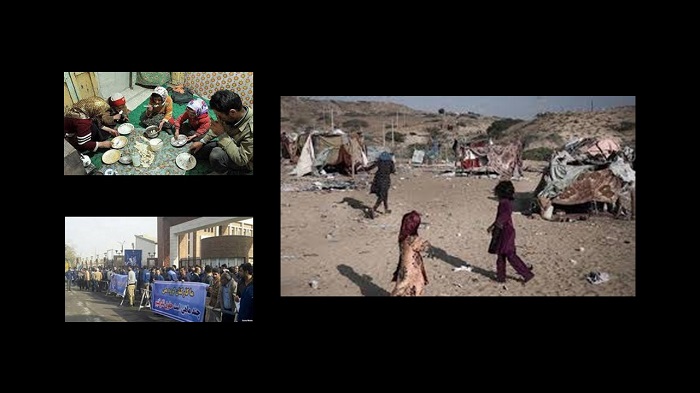 Iran decided to send people back to work three weeks ago. Many even among the power hierarchy questioned the measure, fearing a resurge of the COVID19 pandemic.   The government defended its decision on grounds, that although not directly explained, were unmistakably true: as the regime’s President Hassan Rouhani pointed to the fact that people would rather die from coronavirus infection than hunger.

The coronavirus crisis has added around 5% to 90% of Iran’s working class living under the poverty line.

Seyed Hassan Moussavi, chairman of Iran’s Social aides’ association, said to Sharq daily: “More than 63 million Iranians have applied for the government aid package, which hardly exceeds 60 dollars. According to figures of Iran’s Ministry of Labor and Public Welfare, around 4.5 million Iranians enjoy no social aid at all, with 2.3 million of them having more than 65 years.”

According to Iran’s Ministry of Transfer and Civil Planning, around 21 million people live in unsuitable areas of cities normally deprived of public services.

14000 people live in Tehran search trashes to earn their food, of which 4600 are juveniles. Half a million children are working in Iran to earn their and their family’s living.

20 million people in Iran are considered without a home or a proper home, normally living in shanty towns around big metropoles.

The society is waiting for the occurrence of negative and unprecedented events at any moment.” https://t.co/ppJ49KRai4#Iran #MEK #COVIDー19 #coronavirus @USAdarFarsi pic.twitter.com/c8GrzIgcmJ

According to Iran’s Social Welfare Organization, which covers aid to 43 million Iranians in poor economic conditions, the government owes 260 Trillion Toomans ($30B) to the said organization. It has plans to pay 50 Trillion Toomans this year, which would only cover 4 months of payment to beneficiaries.

667.000 people registered in the unemployment insurance fund because of the coronavirus crisis have to wait before it is clear who is going to pay them. A fight is going on between the government and the fund as the Ministry of Cooperation announced in May there are no funds allotted to this effect in the government’s budget.

The few examples cited above show the ultra-fragile economic situation of the country. With nation-wide protests covering 200 cities last November still in mind, the regime is extremely cautious to avoid another downpour of the hungry into the streets. An unprecedented crush-down, costing no less than 1500 lives to citizens, allowed the regime to maintain order in November. No one can predict the coronavirus crisis’s effect on social behavior, but an eventual next uprising could be much more difficult to quench than that of November.

Regime’s supreme leader Ali Khamenei directly blamed the opposition MEK Iran for the uprising. Such widespread protest covering 200 cities was certainly inspired by the MEK, but apart from the latter’s organizational and inspirational role, the explosive potential of the society did not escape many an expert on Iranian affairs’ attention. The same potential remains and has even grown a lot following the coronavirus crisis.

The government’s lack of a solid social plan to maintain quarantine led to lifting the lockdown in March.

So fears from widespread popular unrest remain very much present in the country.

A recent study by the regime’s parliament’s economic commission on unlawful imports has shown that $25B worth of goods enters the country yearly through unlawful channels.

31 known methods for unlawful imports exist, with 95% undertaken through official channels, that is through the customs service, according to the report. Around 33% of all goods imported thus enter the country unlawfully, with only less than 8% ever discovered.

The report affirms that 40 specific measures to be taken by related official organs to prevent contraband were never undertaken, and 70 such measures were taken only half-heartedly.